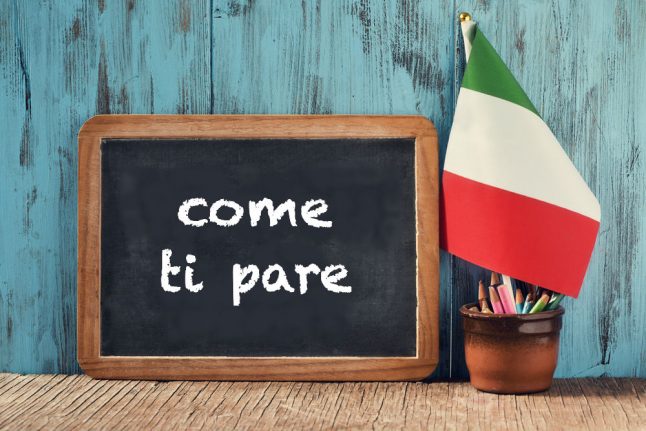 When you're new to a country, there's a lot to be said for doing 'whatever you like'. I don't mean whatever grabs you at the time, I mean greeting the things that might seem strange to you with a shrug and a live-and-let-live attitude.

That's why today's phrase is a great one to live by: come ti pare, 'whatever you like'.

It translates literally as 'how it seems to you', and is based on the useful verb parere – 'to seem' or 'to look', and by extension, 'to think' or 'to feel like'.

Mi pare ovvio.
It seems obvious to me.

Fa quello che le pare.
She does whatever she feels like.

If you don't quite follow the jump from 'seem' to 'feel like', try thinking of it as something that 'seems good' to you, or her, or them, or whoever the subject of the sentence is.

So come ti pare is 'however seems good to you' – in other words, 'whatever you feel like'.

Since it's an impersonal construction, you don't need to change the verb (come… pare, the 'how it seems' part) depending on who you're speaking about. But you will need to alter the 'to me/you/her/him/us/them' bit as appropriate, by choosing the right indirect pronoun to go in the middle.

Fai come ti pare.
Do as you like. (singular)

Fate come vi pare.
Do as you like. (plural)

Il re fa come gli pare.
The king does as he pleases.

La regina fa come le pare.
The queen does as she pleases.

Hanno il diritto di vestirsi come pare a loro.
They have the right to wear whatever they like.
(NB: you can also swap the indirect pronoun for the direct personal pronoun + a: in this case “a loro”.)

While the phrase might describe someone acting selfishly, it can also leave things generously open. If someone describes a harebrained scheme and you reply “come ti pare“, it's a judgement-free 'Hey, whatever you're into' – and maybe, just maybe, a sign that you're onboard for whatever adventures they cook up.

Of course, there are times when someone says 'it's up to you' and it's really not. But you can't blame the phrase for that.

A particularly dangerous threat if its your mum who says that. In that case, you don't do as you wish….