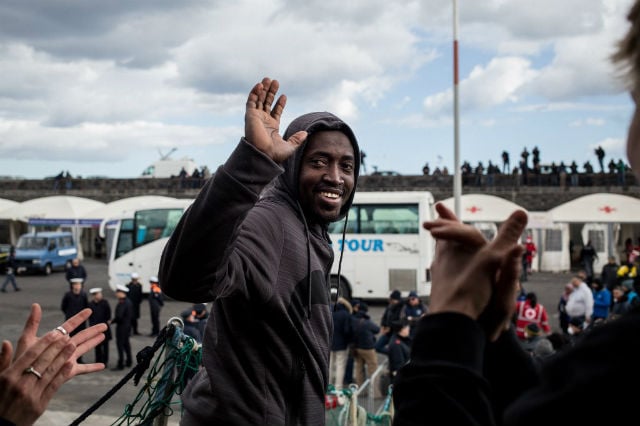 A migrant waves to the cameras as he leaves Sea-Watch 3 on Saturday. Photo: Federico Scoppa/AFP
The 10, including two pregnant women, were allowed to disembark on the Mediterranean island of Lampedusa, which lies between the Italian mainland and the north African coast.
The others were three children, another woman, two sick men and two people accompanying them, media reported citing ministry sources. The vessel rescued 53 migrants drifting in an inflatable raft off the coast of Libya on Wednesday.
READ ALSO:
On Thursday, Salvini, leader of the far-right League party, ordered Italian law enforcement to prevent the boat from entering Italian waters.
On Saturday, Salvini announced on Twitter: “I have just signed a ban on the entry, transit and berthing of Sea-Watch 3 in Italian territorial waters, as provided for by the Security Decree.” The decree still has to go before Italy's parliament where the coalition government holds a comfortable majority.
On Tuesday, Salvini said the 18-article decree would bring fines of up to 50,000 euros ($57,000) for the captain, owner and operator of a vessel “entering Italian territorial waters without authorisation”.
Salvini has seen his popularity soar in the last year after taking a hard line against migrants, which has included closing ports to rescue vessels.
Salvini says those setting sail from Libya to seek safety in Europe should be returned to the crisis-hit country — an order that is contentious under international law.
The NGO Sea Watch has repeatedly said it would not land survivors in Libya as it did not consider Tripoli a port of safety.
More than 12,000 people have died since 2014 trying to flee Libya to Europe by what the UN refugee agency calls the “world's deadliest sea crossing”. 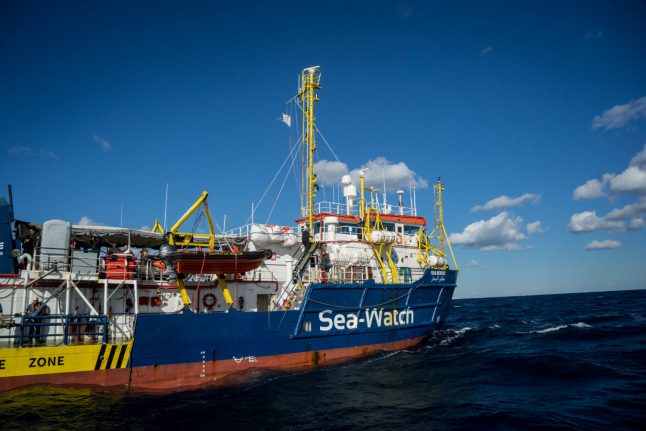 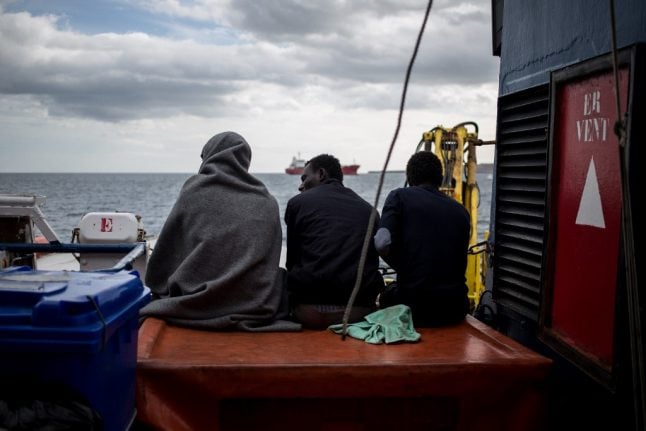 IMMIGRATION
Families rescued off Libya allowed to land in Italy 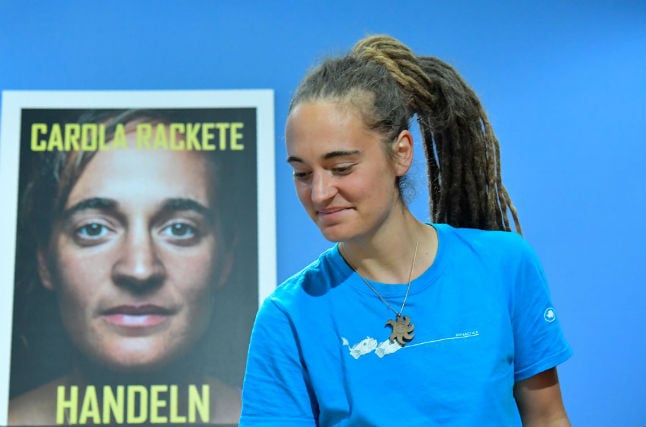 Carola Rackete at the release of her book 'Act instead of hoping' in October. Photo: Tobias SCHWARZ / AFP
“This is an important verdict for all sea rescue activists!” Rackete said on Twitter. “No one should be prosecuted for aiding people in need. The EU directive on 'crimes of solidarity' needs reform,” she said.

??The Italian Supreme Court confirmed today that I shouldn't have been arrested in June for saving lives.

This is an important verdict for all sea rescue activists!

No one should be prosecuted for aiding people in need. The EU directive on “crimes of solidarity” needs reform.

The dreadlocked Rackete was skipper of the Sea-Watch 3, one of several ships used by international charities to rescue migrants attempting the perilous sea journey from North Africa to Europe on rickety boats.
On June 12, Rackete's ship picked up 53 migrants adrift aboard an inflatable raft off the coast of Libya.
The Italian authorities allowed some of the migrants to be taken in for health reasons but refused entry to more than 40 others, leading to a two-week stand-off at sea.
As conditions on board worsened, Rackete eventually sailed her ship to the island of Lampedusa despite an order from Italian officials not to dock there. Rackete at the time of her arrest by Italian police on June 29. Photo: Local Team/AFP
She was arrested on June 29, although a judge overturned that order on July 2, saying she had acted “out of necessity” because of the migrants' condition.
The high court Friday ruled that Rackete's arrest was not warranted.
Sea-Watch, the charity which runs the rescue ship, welcomed the ruling, tweeting: “Once again: Sea rescue is not a crime!”
Rackete became a left-wing hero in Italy for challenging then far-right interior minister Matteo Salvini's “closed ports” policy. Salvini is facing a potential trial for allegedly illegally detaining migrants at sea.
A tribunal has recommended he stand trial for blocking migrants on a coastguard boat last July. But under Italian law ministers cannot be tried for actions taken in office unless a parliamentary committee gives the go-ahead.
The committee is due to take a decision on Monday, though that may be postponed.
Should the trial go head, Salvini faces up to 15 years in jail if found guilty.
“For some judges a German lady, who risked killing five Italian soldiers by ramming their patrol boat, doesn't deserve jail time, but the minister who blocked dockings and human trafficking does,” Salvini said on Twitter. “That's not justice, that's a crying shame,” he said.
Salvini has accused his successor of re-opening the ports to rescued migrants, prompting more departures from Libya.
But Matteo Villa from the Institute for International Political Studies dismissed the alleged “pull factor”, and pointed out last week that while the number of arrivals dropped under Salvini, the death toll in the Mediterranean rose.  It has dropped sharply since he left office.
In the early hours of Friday the Ocean Viking rescue ship pulled 39 people to safety from a rickety wooden boat off Libya which had begun taking in water.  Medical charity Doctors Without Borders, which charters the ship along with SOS Mediterranée, said the rescue had been particularly “challenging” due to rough seas and fierce winds.
SHOW COMMENTS