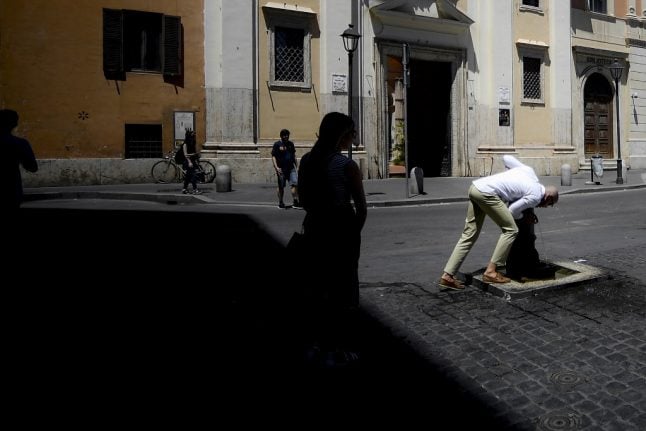 Cooling off in Rome, where temperatures are forecast to hit 38 degrees this week. Photo: Filippo Montefortte/AFP

The next seven days will see “one of the most intense heatwaves of the past decade” in Europe, predicts the 3BMeteo weather service, whose forecasters believe that the second half of the week could set new records in several Italian cities for the highest temperatures ever recorded in June.

READ ALSO: How to keep cool during Italy's heatwave

Highs of 37-40 degrees C are forecast across the north and centre, including in Rome, Florence, Bologna, Milan, Turin and Sassari. Most of the south, meanwhile, should peak around a slightly more bearable 35 degrees.

While most Italian cities are already feeling the heat, the peak is expected to hit between Thursday and Friday, when parts of the Piedmont region could get as hot as 42 degrees.

High humidity and lack of wind will combine to create sultry conditions that barely cool off after sundown, with temperatures remaining in the high 20s in urban areas even at night. Things should get a little cooler over the weekend, but not by much: temperatures will remain above the seasonal average in many parts of Italy, around the mid-30s.

The heatwave could prove especially dangerous for Italy's large elderly population, warns geriatricians' association Sigot, which is urging people to pay particular attention to the dangers of dehydration.

It marks an abrupt change from the unseasonal storms that have been wracking the north of Italy, with downpours and hailstorms as recently as last weekend.