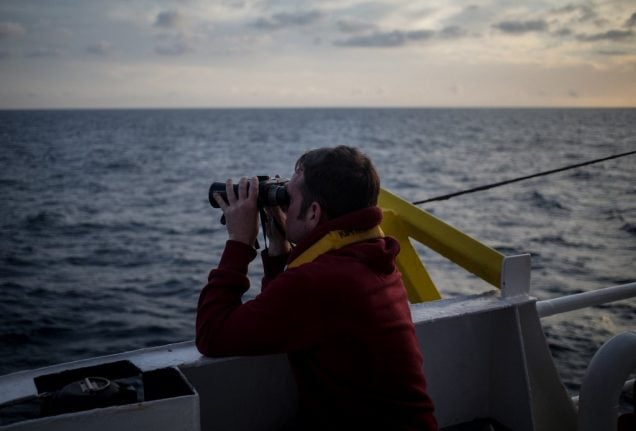 A member of crew on the Sea Watch in January. File photo: Federico Scoppa/AFP

Captain Carola Rackete steered the Sea-Watch 3 NGO boat into the port off Lampedusa island on Wednesday.

“I know this is risky, but the 42 shipwrecked on board are exhausted,” she was quoted as saying by the NGO on Twitter.

“I'm ready to go to jail if somebody would prosecute me for that and to defend myself in court if need be because what we are doing is right,” the 31-year-old German added in a video post on Wednesday.

She said: “we Europeans have allowed our governments to build a wall at sea,” adding that she has “the privilege to be in a position where I can actually help”.

Italian Interior Minister Matteo Salvini has tried to ban the Dutch-flagged vessel from approaching under a “closed ports” policy, which has seen migrants repeatedly stranded at sea.

“Those who do not care about the rules have to answer,” he warned in a social media post, adding: “What are they waiting for to issue an arrest warrant?”

Marine tracking websites showed the vessel, registered in the Netherlands but operated by the German Sea-Watch NGO, had entered Italian territorial waters after spending 14 days sailing back and forth off the coast of Italy's southernmost island.

This is the track of the #SeaWatch 3 the last days. It draws the border between Italian territorial water and international water. Can you see it?

42 people are forcibly kept outside. 42 people that Europe, a continent of over 500 million inhabitants, does not want. Forty-two. pic.twitter.com/0iNndCKQiu

“We will use every lawful means to stop an outlaw ship, which puts dozens of migrants at risk for a dirty political game,” Salvini had earlier said on Facebook.

“I will not give permission for anyone to disembark… Our patience is over. The Netherlands will answer.”

Salvini said Rome's ambassador to The Hague was “taking a formal step with the Netherlands government” to resolve the issue.

Salvini earlier this month issued a decree that would bring fines of up to €50,000 for the captain, owner and operator of a vessel “entering Italian territorial waters without authorisation”.

Italy's interior ministry says more than 400 migrants have arrived in the country over the last two weeks aboard smaller vessels, while the Sea Watch has zig-zagged on the high seas without a safe port.

“It's serious when the captain has no other choice but to honour her sense of responsibility at the cost of personal consequences,” said Carlotta Sami, spokeswoman for the UN refugee agency in Italy, adding that the “criminalisation of NGOs must end”.