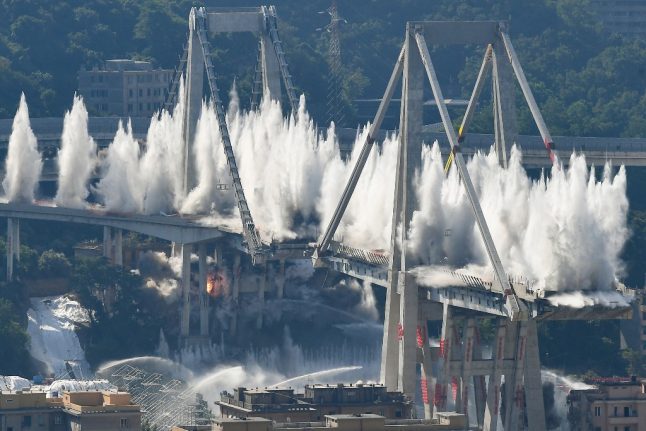 The last standing pylons of the Morandi bridge were demolished on June 28th. Photo: Vincenzo Pinto/AFP

The remains of the 4,500-tonne Morandi bridge were detonated at 9:37 am and took just seven seconds to collapse in a cloud of dust, city authorities said.

Nearly 4,000 residents had been evacuated ahead of the demolition, and water tanks were placed around the towers to prevent the spread of dust. Some 400 security forces were also deployed to the area.

Cannons began shooting high towers of water into the air below the bridge seconds before the explosion, which ripped the bridge in two before bringing the giant structure crashing down.

A deafening boom resounded across the north Italian city milliseconds after the collapse as alarms rang out. Locals and officials including Deputy Prime Ministers Matteo Salvini and Luigi Di Maio witnessed the blast.

The bridge collapsed in August during a heavy rainstorm, sending about 35 cars and several trucks plunging 45 metres onto railway tracks below.

Ahead of the demolition, local residents expressed relief that the eyesore would finally be gone, but were also concerned about the possible consequences of the explosion.

The bridge “is high, it is big, it is full of iron, it is super heavy… I don't know what will happen when it falls. Apart from the dust it will cause, I am worried about the impact,” local resident Francesco Russo told AFP TV. After the explosion. Photo: Vincenzo Pinto/AFP

With the demolition over, officials are now waiting for the arrival of a ship transporting the first parts of a new bridge, the construction of which is scheduled to begin next year.

The government has promised that the new steel and concrete motorway bridge, designed by Italian architect Renzo Piano, will be open for traffic in April 2020.

Meanwhile, controversy persists over concessions enjoyed by Italian infrastructure group Atlantia, whose majority-owned subsidiary Autostrade was responsible for maintenance works on the bridge.

Di Maio, who is also economic development minister, insisted on Wednesday that Atlantia would have concessions revoked in a move that would cost it — and its main shareholder, the Benetton family — dearly. The group would therefore be unable to take part in the rescue of troubled national airline Alitalia, he said. The Morandi bridge is no more. Photo: Vincenzo Pinto/AFP

His comments sparked a drop in Atlantia shares and the company threatened legal action. Business leaders and politicians on both left and right accused Di Maio of triggering market speculation.

Atlantia, a world leader in motorway and airport concessions, employs some 30,000 people worldwide.

Italian Prime Minister Giuseppe Conte has said the revocation procedure is ongoing. “The serious breach [of responsibility] is an objective fact, we cannot pretend that nothing has happened,” he said.