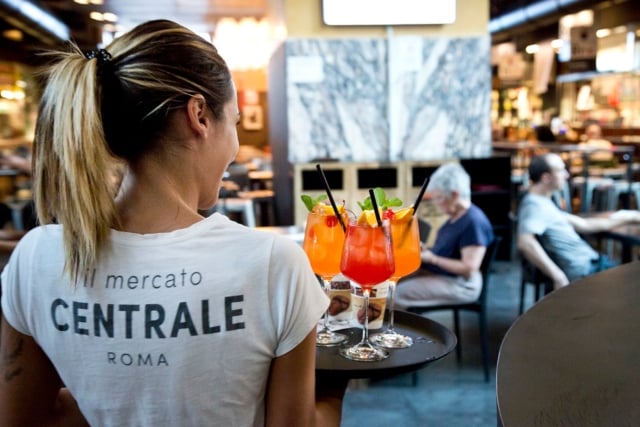 With so much to see and do in Rome, from museums to galleries, ancient ruins and the beautiful chaos of the city to get lost in, it can sometimes seem overwhelming when it comes to finding the right place to sample the traditional local fare.

There are some things you just can’t miss when you’re visiting Rome and while you’re working through your checklist of sights and sounds, make sure you visit Mercato Centrale Roma where you can find all the best Roman delicacies in one place.

While you’re there, make sure to try these traditional Roman dishes.

One of the most popular Roman dishes, it is the perfect example of how Italian cuisine can combine the simplest of ingredients in a kind of alchemy for your taste buds. Just three ingredients – pasta (usually tonnarelli), freshly ground black peppercorns and Pecorino Romano, a tangy, pungent sheep’s cheese.

If you haven’t tried it, it’s an absolute must when in Rome. It may sound overly simple to foreigners who are used to more ingredients, but cacio e pepe, once the ingredients are combined in the right way, is a gastronomical delight. Legend has it that it was developed for roaming Roman shepherds, who were able to easily carry the ingredients and could whip it up around their campfire at night. Whatever its origin, it is in some ways the essence of Roman cuisine – simple, hearty and delicious. Try cacio e pepe at Mercato Centrale Roma, where Egidio Michelis does one of the best in the Eternal City.

Rome can lay claim to what many Italians believe to be the greatest of all pasta dishes; combining pancetta, pasta, eggs, black pepper and cheese. It is usually made with spaghetti, but you can also find fettuccine, bucatini and tagliatelle versions. Whatever pasta is used carbonara is without a doubt Italian gastronomical perfection. Ask Italians how they make carbonara and you will a different answer every time, but of course the best is always ‘Mama’s’. You can use Pecorino Romano or Parmigiano-Reggiano and the meat is either guanciale (pig’s cheeks) or pancetta. Some people use the whole egg, others, just the yolk, while others even add onion. Adding cream to carbonara is considered heresy and should never, ever be done. The name comes from the word ‘carbonaro’ for the city’s charcoal workers, once an important job that powered the city’s ovens, stoves and water heaters and it is thought that the hearty dish provided the workers with the energy they needed for the gruelling work. A trip to Rome without tasting a real carbonara would be like skipping the Colosseum so make sure you head to Mercato Centrale Roma to sample the best in Rome by Egidio Michelis. Roman artichokes are world famous and it can’t be overstated how superior they are to any other artichokes you can find. There are two main artichoke dishes you simply must try while visiting Rome. The first is Carciofi alla Romana, or ‘Roman-style artichokes’. The artichoke is stuffed with parsley, lesser calamint and garlic, braised in white wine and seasoned liberally with salt and pepper. The second is Carciofi alla Giudia, which has its roots within the Roman Jewish community. The artichokes are deep fried in olive oil making them golden brown and giving them a crispy consistency. The fresh, slightly bitter taste of Carciofi Romanesco is a delight on the palate and they can be enjoyed as a side course, as part of a main, or as Roman street food while you’re on the go. For the best artichokes in Rome, go to Alessandro Conti and Gabriele La Rocca‘s shop in Mercato Centrale Roma. Alessandro Conti – owner of the historic fruit and vegetable shop that’s been in the market of Campo de’ Fiori for four generations – knows the best way to prepare the vegetable and they will be cooked right in front of you. The Roman version of the Sicilian arancini, is a ball of rice stuffed with cheese, coated in breadcrumbs and deep fried. Part of the Roman tradition of street food, they are a firm locals’ favourite and are often served as antipasti. Perfect for filling the gap when you’ve worked up an appetite walking miles around Rome’s attractions. At Mercato Centrale Roma, Martino Bellincampi’s emporium of fried delights is the place to get your hands on these delicious delicacies. In fact, Bellincampi excels at the art of frying with a wide range of fried foods to tempt you. “You can fry everything as long as you find the right packaging,” says Martino.

The ancient Etruscans are credited with creating the salty, soft, yeast-risen flat bread but the Romans perfected it and brought it throughout the known world. The plain version is excellent on its own or as an accompaniment to your drink, but there an uncountable amount of variations – with onions, olives, cheese, tomato. Gabriele Bonci at Mercato Centrale Roma is known as the ‘Michaelangelo of Pizza’ and he brings a high craftsmanship to his pizza, breads and, of course, focaccia. Using only specially-sourced flours and yeast, combined with his years of experience in some of Italy’s most renowned bakeries, this is the place to go.

Discover all the food artisan at Mercato Centrale Roma

The origins of the classic Italian dessert are a little muddled. Most attribute the invention to Roberto Linguanotto, owner of “Le Beccherie” restaurant in Veneto in the 1960s. However some also claim that it comes from Siena. There are many, many different versions of the dessert but the classic of Mascarpone, ladyfingers, coffee, cream, eggs and cocoa is the most popular. The name translates to “pick me up” and that’s exactly what it does. As in the classic Italian recipes the ingredients are relatively simple, but rely on the expertise of the cook to blend them into something spectacular. That’s what master pastry chefs the De Bellis brothers do at Mercato Centrale Roma. Try their famous tiramisu or if you fancy something else, you’ll be spoilt for choice with their handcrafted creations. The pizza-sandwich hybrid is crunchy on the outside and soft and delicious on the inside. Instead of the usual pizza toppings, the Trapizzino contains some of the best Roman dishes all packaged in a delicious crunchy casing and ready to eat in your hands. Created in Rome by Mercato Centrale Roma’s own Stefano Callegari the pizza pocket has also travelled to New York where they continue to cause a sensation.

Try something a little different

All roads lead to Rome and the same is true for Mercato Centrale Roma. If you want to try something different you can choose Akira Yoshida’s famous ramen prepared with patience and craftsmanship by Rome’s master of the Japanese soup dish. Every day, Akira prepares Ramen Black Shoyu (with an intense flavour), Ramen White Shio (with a delicate flavour) and Ramen Red Spicy (with a spiced flavour), as well as edamame, all guaranteed to satisfy and restore.

READ ALSO: A digestible guide to eating and drinking like an Italian

This article was produced by The Local Creative Studio and sponsored by Mercato Centrale Roma.