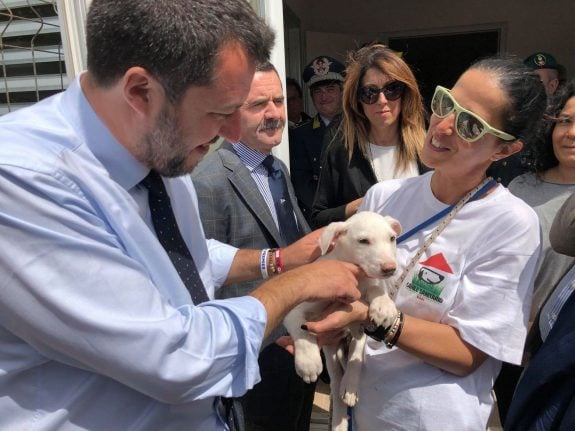 The country's populist coalition may be heading at full speed towards a crisis, according to Italian political watchers, who say far-right leader Salvini could force a vote as early as the end of this year.

And both Salvini and Berlusconi are betting on a time-honoured ballot-winning trick: portraying themselves as the saviours of four-legged friends.

A poll this week showed the League could win 37 percent of votes if an election were held – enough for Salvini to ditch M5S and govern in an alliance with parties on the right.

That could see the League join forces once more with its historic ally, Berlusconi's Forza Italia party. Salvini's campaign to create a pet-friendly persona started last year, when he began posting photographs of cats sent to him by followers on his Facebook page.

He followed that with a visit this week to a centre for stray cats in Rome, posing with some of its 450 whiskered inhabitants.

However the League leader has some way to go to catch up with Berlusconi, who boasts of sharing his Milan villa with a “happy family” of dogs, sheep, horses and other animals.

The three-time former prime minister, known around the world for his “bunga bunga” parties and a string of legal problems, adopted a stray dog from Sicily while on the campaign trail in 2013.

In the run-up to the last general election, he joined a pro-animal rights movement and promised free veterinary care for pets.

And in March, before this year's European Parliament election, the billionaire launched a new campaign to improve animal welfare.

“Nine of my dogs sleep in my room. They wake up with me, have breakfast with me,” he said in an interview at the time. The 82-year-old's most famous dog – a white Maltese terrier named Dudu, introduced to his life by his 34-year-old girlfriend – has his own Facebook page, which sports photographs of Berlusconi hugging lambs.

Salvini's coalition partner and fellow deputy prime minister Luigi Di Maio, the head of M5S, has limited himself to a selfie this month with a police German Shepherd sniffer dog called Buk.

Should M5S -which is lagging in the polls – face the ballot box soon, that may turn out to be too little, too late.