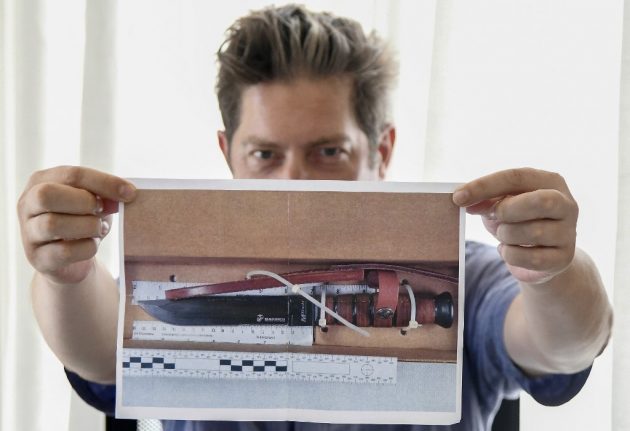 A picture of the knife believed to have been used to kill policeman Mario Cerciello Rega. Photo: Filippo Monteforte/AFP

Two American teens arrested after an Italian police officer was stabbed to death in Rome during a botched drug bust broke down into tears during their interrogation, police said on Tuesday. Elder has confessed to stabbing plainclothes officer Cerciello, 35, with a US Marine partially-serrated, close-quarters combat knife, police said, as they gave a detailed account of what happened on the night of the killing.

“Is he dead? Really dead?” Natale asked interrogators after his arrest, before beginning to cry, prosecutor Nunzia D'Elia told AFP during a press conference in Rome. “Elder also shed a few tears” as the realization of the weight of the charges against the pair hit home, she added.

Police believe both had been drinking shots and beer, while Elder had also taken prescription drugs.

Parallels have been drawn in Italy between this murder and the high-profile case of Amanda Knox, a US student who was convicted and acquitted years later of the murder of a housemate in Perugia in 2007. Knox accused police of beating an initial, false confession out of her under interrogation.

A photo taken of Natale blindfolded and handcuffed while under questioning sparked widespread criticism and fears of a similar miscarriage of justice — with the head of the lawyer's union saying it might invalidate the interrogation.

Prosecutor Michele Prestipino said it was “unacceptable” and a “rigorous” probe into the incident was underway. The chief of the Carabinieri called the blindfolding of a suspect 'unacceptable'. Photo: Vincenzo Pinto/AFP

Cerciello and Varriale had been tasked with intercepting the pair after an intermediary on a drug deal reported them to the police for stealing his bag after they were sold aspirin in the place of cocaine. The officers knew where they would be, because they had set up a meeting with the intermediary to ransom the bag.

Cerciello and Varriale told Elder and Natale they were law enforcement officers, the police said. But the US suspects, who were wearing hooded sweatshirts, claim they thought the men were dangerous drug dealers.

“Elder says Cerciello knocked him to the ground, and in fear he pulled out the knife and stabbed him until he released his grip,” D'Elia said.

The weapon, which has an 18-centimetre blade, was brought over to Italy from the US, police said.

“Cerciello was stabbed 11 times. In some cases the knife was thrust in up to the handle, puncturing his stomach, his colon, his intestines,” Rome police chief Francesco Gargaro said. Elder was carrying the knife on his person, and police said it was “impossible” Natale did not know he had it.

Cerciello, who had recently returned from his honeymoon, had been carrying handcuffs, but not his gun, which he had left in the barracks after bringing colleagues ice cream earlier in the evening.

Varriale was armed, but “there was no time to react, the suspects fled immediately…. And even if there had been time, he could not have shot the suspects in the back,” Gargaro said.

Rather than chase the teens — who made their escape to a hotel just 80 metres away — Varriale tried in vain to stem the flow of blood from Cerciello's wounds, he said.

Elder and Natale — who has Italian relatives and reportedly holds dual US-Italian citizenship — were being held in Rome's Regina Coeli prison, and have been briefly visited by a US government official.