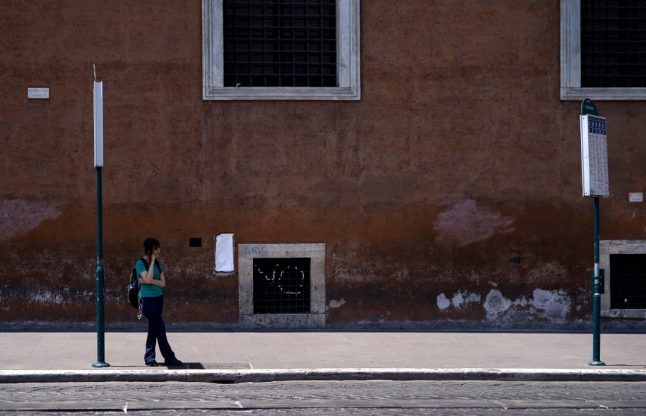 No buses in sight at a Rome bus stop. Photo: Filippo Monteforte/AFP

Travellers wait an average of 20 minutes per trip in Rome for a bus, metro, tram or train to turn up, according to travel planner app Moovit, which uses real-time data from users' smartphones to track journey times.

That puts Rome's wait times on a par with Bogotá or Los Angeles, and makes its public transport system the slowest of any European capital surveyed. Passengers wait 18 minutes on average in Athens, 14 minutes in Lisbon, 13 minutes in London, 12 minutes in Paris, 11 minutes in Madrid or Moscow, and just 10 minutes in Berlin, the study said. Waiting for the bus in Rome. Photo: Filippo Monteforte/AFP

The result is one of the slowest commutes in Europe: Romans spend an average of 79 minutes per day on public transport, despite travelling a shorter distance – 6.8 kilometres – than passengers in other cities.

In Madrid, for instance, the average commuter travels nearly three kilometres further than their equivalent in Rome (9.5 km), but they do it in just 62 minutes – saving them a full 17 minutes per day. And 22 percent of commuters in Rome spend more than two hours on public transport daily compared to 15 percent in Berlin, despite the Italian capital's far smaller size.

READ ALSO: What you need to know about Milan's new public transport fares

The good news is that not all Italian cities are as slow to get around as Rome. Moovit found much more reasonable wait times outside the capital: just 10 minutes in Venice, 11 minutes in Milan or Trieste, 12 minutes in Genoa or Bologna and 14 minutes in Florence.

Unsurprisingly, Italy's economic capital Milan has one of the country's most efficient public transport networks: only 12 percent of passengers wait more than 20 minutes, and they typically spend 64 minutes travelling 7.7 kilometres. Just 14 percent spend over two hours on public transport a day.

At the other end of the scale, meanwhile, is Naples, Italy's third biggest city, where the majority of passengers – 56 percent – have to wait more than 20 minutes for their transport to turn up. The average wait time is 27 minutes per trip, worse than any European or North American city surveyed and comparable only with parts of Brazil.

Studies consistently rank Rome as one of the worst cities in Europe for mobility. While its metro system is relatively reliable – when stations aren't closed for months at a time – it has just three lines with limited connections. Many parts of the city are accessible only by buses, which are chronically late and prone to bursting into flames.

(Pro tip: when waiting at a bus stop in Rome, look for the five-digit ID number and enter it at muovi.roma.it to get real-time information on when the next bus is expected to arrive. It's not always 100 percent accurate, but it's more reliable than the timetable and should give you a rough idea of whether it's worth your time to wait.)

The unreliability of public transport means most Rome residents rely on private cars or scooters to get around, contributing to high levels of air pollution, traffic and road accidents.