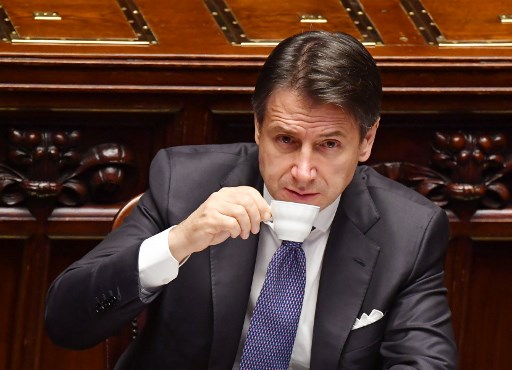 After a heated debate, 343 MPs backed the incoming coalition of the anti-establishment Five Star Movement and centre-left Democratic Party, while 263 voted against, according to the official count.

Much of Conte's first speech to parliament earlier in the day was dedicated to chiding the previous populist coalition for endless bickering, and promising the new government would be better behaved.

The most pressing issue for the new coalition will by the upcoming 2020 budget, a key test for relations with Brussels.

Conte called for the EU's Stability and Growth Pact, which limits budget deficits to three percent of gross domestic product in member states, to be “improved” and simplified.

The pact was the main bone of contention between the European Commission and the previous populist government in heavily indebted Italy, which must submit a balanced budget to Brussels in the coming weeks.

Should it fail to do so, Italy could face an automatic rise in value-added tax on January 1 to bring in more funds — punishing the poorest the hardest.

“Italy must not become a second Greece. In any case, we are not prepared to pay Italy's debts!” Kurz tweeted on Monday.

Conte said the government would step up efforts to improve the lives of the poor and disadvantaged, from income support for the lowest earners to help for the disabled, earthquake victims, and working mothers, as well as tackling gender inequality. He promised Italians that, after a season of bitter fighting and hate propaganda, the new watchword would be respect.

“We cannot in the coming months waste our time with disputes and clashes,” he said, adding that the government must act with “new humanism” rather than arrogance.

Demonstrators from the hard-right League and its smaller ally the Brothers of Italy party descended on the square outside parliament, some chanting “Duce! Duce!”, the title fascists used to address wartime dictator Benito Mussolini.

“We will be a serious opposition, in parliament but also among the people, from north to south, one town after another,” League leader Matteo Salvini said, slamming the new alliance between the former party foes.

The former strongman kissed and held aloft his rosary – a political use of a religious object which has irked many Catholics.

Conte said the country was on the threshold of a “season of reforms”, which would work to ease Italy's colossal public debt, currently more than 2.3 trillion euros or 132 percent of GDP — the highest rate in the eurozone after Greece's.

Brussels has constantly called on the eurozone's third-largest economy to reduce its deficit and the accumulated debt. It frequently clashed with the outgoing populist government over its big-spending plans.

The previous coalition eventually agreed to reduce the annual deficit to 2.04 percent of GDP in 2019, instead of 2.4 percent.

On the hot-button topic of migration, Conte disappointed human rights activists who had hoped he would announce a sharp about-turn on Salvini's controversial immigration laws, although he did say integration measures would be boosted.

He said promises of solidarity between EU member states were not enough, and insisted that both Italy and the bloc must stop treating the migration phenomenon in crisis mode, but implement concrete measures such as humanitarian corridors.

As Conte spoke, the Sea-Watch charity tweeted that their reconnaissance plane had spotted a dinghy “in distress with around 30 people on board” off Libya “with nearly no search and rescue capacities at sea to rescue them”.

Our reconnaissance plane #Moonbird spotted a blue rubber boat in distress with about 30 people on board at 13:20. It is the second day in a row with boats in distress off the Libyan Coast and nearly no SAR capacities at sea to rescue them.