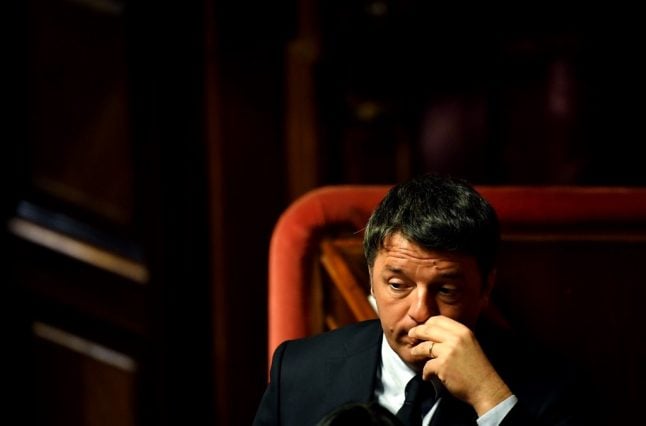 “I have decided to leave the PD and to build together with others a new house to do politics differently,” Renzi wrote on Facebook, barely a week after the PD's coalition with the Five Star Movement (M5S) won a confidence motion in parliament.

Renzi is not himself part of the new government, formed through the unlikely PD-M5S alliance in order to thwart hard-right leader and now ex-interior minister Matteo Salvini's bid to call snap elections he thought would make him premier.

But Renzi, who was hailed as a reformer when he became Italy's youngest premier at the age of 39 in 2014, was a divisive figure within the PD, particularly for the party's left which is largely loyal to party leader Nicolas Zingaretti.

“After seven years of friendly fire I think we must take note that our values, our ideas, our dreams, cannot every day be the object of internal quarrels,” Renzi wrote.

READ ALSO: Matteo Renzi: How the one-time great hope of the Italian left fell from grace He resigned as premier in 2016 and fraught relations within the PD prompted repeated speculation that Renzi would split to form his own, more politically centrist, party.

“The victory we got in parliament against populism and Salvini was important to save Italy, but it's not enough,” Renzi wrote.

Renzi said that around 30 lawmakers would announce loyalty to him, but he said he would continue to support Prime Minister Giuseppe Conte's government. He called Conte on Monday to reassure him that “I'm leaving the PD but [my] support for the government remains certain,” the Corriere della Sera newspaper reported.

Between 18-20 MPs will follow Renzi, out of the PD's 111 total. Twenty MPs are need to form an autonomous parliamentary group. Around ten senators out of the PD's 51 would also follow, the Corriere reported.

“Today the PD is a set of currents,” Renzi told Tuesday's La Repubblica newspaper. “And I fear that it will not be able on its own to respond to Salvini's attacks and to the difficult cohabitation with the M5S.”

“I believe that there is space for something new. Not from the centre or the left, but from what has occupied the least-used space in Italian politics: the space of the future,” he told the left-leaning daily. “I won't tell you the name but it won't be a traditional party,” Renzi said.

PD leader Zingaretti lamented what he called “an error”.

“We are sorry… But now let's think about Italians' future, work, environment, business, education, investments. A new agenda and the need to rebuild hope with good governance and a new PD,” Zingaretti tweeted.

Renzi said he wanted to spend the coming months fighting Salvini. “I want to make war on Salvini, not Nicola Zingaretti… the bad populism that he [Salvini] represents has not been defeated,” Renzi said.

Salvini took to Twitter to accuse Renzi of “first collecting jobs and ministries, then founding a 'new' party to fight Salvini… Italians will punish these sell-outs.”

Renzi said his new party would not contest elections for at least a year. If the current coalition survives, a general election is due in 2023 and European elections in 2024.