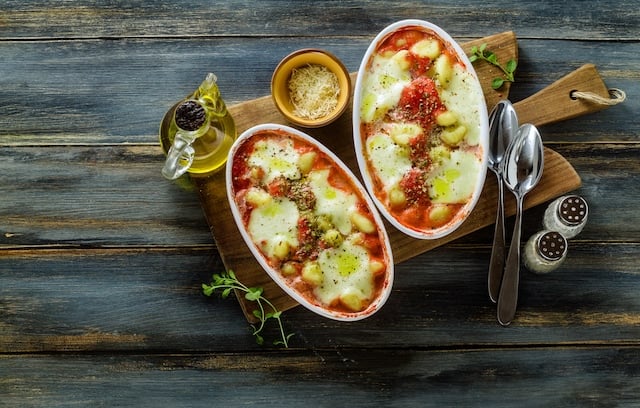 There are a lot of legends about gnocchi alla sorrentina. Photo: DepositPhotos

Gnocchi is one of the first pastas ever made. The first gnocchi was found during digs in a Neolithic village in Trentino-Alto Adige: archaeologists found a dozen small dumplings made with roughly ground flour from local cereals.

Ever since, gnocchi and Italy have had a long love story that saw the birth of over 100 different varieties: chicken gnocchi, semolina gnocchi, ricotta gnocchi, stale bread gnocchi, polenta gnocchi, boiled egg yolk gnocchi… and the list goes on and on. However, the best-known kind of gnocchi is the potato one. Tradition has it that this recipe was created in the 15th century in Sorrento, by a cook intrigued by the new botanical curiosity coming from the Americas. Explorers returned to Europe with their ships full of exotic fruit and vegetables, among these potatoes and tomatoes.

A cook in a small restaurant in Sorrento decided to experiment with the new ingredients and invented the potatoes gnocchi by adding mashed potatoes to the classic gnocchi dough of flour and eggs. Then he took the tomatoes and made a sauce out of them, adding mozzarella and basil, so as to mix the New World with the Old.

As charming as this story might be, it’s historically very inaccurate.

Potatoes and tomatoes weren’t introduced into Italian cuisine until much later. The reason is their high content of solanine, a toxic compound found in potatoes, tomatoes and aubergines.

Tomatoes were a purely decorative plant, gifted by aristocratic gentlemen to their love interests (pomodoro, the Italian for tomato, means 'golden apple' – a gallant recall of the Greek legend of the Golden Apple, destined for the most beautiful woman alive). Potatoes, on the other hand, were considered such a foul food that they weren't even dignified enough to be given to beggars.

It was only after the famine of 1724 that potatoes started to make their way into Italian cuisine. For the tomatoes, we’d have to wait a little longer. Therefore gnocchi alla Sorrentina is likely to have been created at the beginning of the 19th century.

Whatever its date of birth is, this recipe is absolutely delicious, and one of my favourites. It was always a good day when my mum made gnocchi; and today, it’s my children who cheer every time I do! 1. Boil the potatoes whole with the skin on, until you can easily stab them with a fork. Depending on the size of the potatoes, it will take about 20-30 minutes. Immediately peel and mash the potatoes, preferably with a potato ricer: you want a very smooth mash, without bits. Do not over-mash the potatoes, otherwise they'll start to produce extra water.

2. Put the potato mash on a clean, flat surface. Form a large well and add the flour and the egg in the middle. Knead everything until you obtain a smooth dough. Do not over-knead, otherwise it’ll start to become sticky. If it does happen, don’t add extra flour – instead, add potato starch. As a general rule, keep the kneading to a minimum and don’t add more than 300 g of plain flour for every kilo of potatoes.

3. Cut a small section of the dough and roll it into a rope a finger thick. Then cut the rope into small dumplings of about 1 cm long. If you don’t have patience or time, you can stop there. But if you feel like it, using a gnocchi stripper or a fork, roll the dumpling so as to create ridges all over the surface. Follow this procedure with the rest of the dough.

Leave the gnocchi to rest on a cotton cloth, while you prepare the sauce.

4. In a large saucepan, heat the oil and the crushed garlic cloves. Cook on low heat for about 5 minutes. Add the chopped tomatoes, raise the heat to high, bring the tomato to the boil, then lower the heat again to medium-low. Allow to cook for 15 minutes, stirring occasionally. Season to taste.

Bring a large casserole of water to boil. Salt abundantly. Scatter a few handfuls of gnocchi in the boiling water (you don’t want to add too many, otherwise they will stick together or, even worse, break) and stir carefully to avoid the gnocchi sticking to the bottom of the casserole.

6. In a large oven dish, place half of the gnocchi, spreading well so they cover the entire base. Cut the mozzarella in small cubes, and scatter half of it over the gnocchi. Sprinkle in a tablespoon of grated Parmesan cheese and a few torn basil leaves.

Bake it in the oven for 15-20 minutes. Serve immediately. 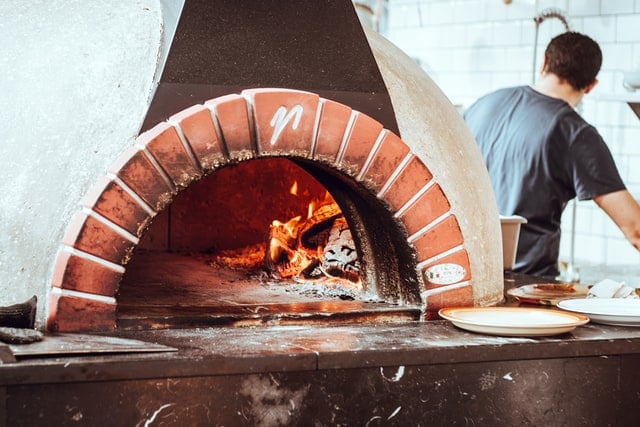