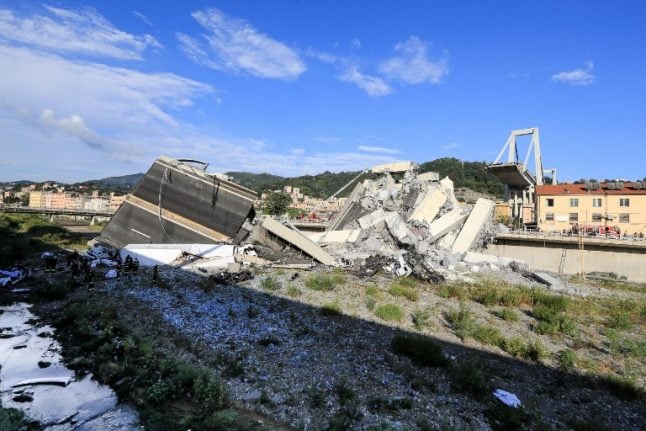 Rubble from the collapsed Morandi motorway bridge strewn along the railway line in the port city of Genoa on August 14, 2018. Photo: AFP

Autostrade per l'Italia (ASPI) managers have reportedly told investigators that surveys by motorway risk monitoring company SPEA had not flagged up any alarm on the Morandi Bridge.

But the risk was detailed in an internal document, seized by investigators from Italy's financial police, La Repubblica reported.

That risk programming document, drafted by ASPI, was allegedly seen by successive board meetings of both ASPI and Atlantia, as well as by government representatives from the Infrastructure Ministry at a meeting in 2015, La Repubblica wrote. Wreckage at the site of the disaster. Photo: AFP

The document reportedly said the Morandi Bridge was “at risk of collapse” from 2014 to 2016, while from 2017 the assessment was changed “risk of losing stability”.

A large section of the Morandi highway fell during heavy rain on August 14, 2018, hurling dozens of cars and several trucks onto railway tracks below.

The Morandi motorway bridge had been riddled with structural problems since its construction in the 1960s, which led to expensive maintenance and severe criticism from engineering experts.

Some engineers described the collapse as “a disaster waiting to happen.“

Responding to the newspaper report, ASPI didn't deny the existence of the document but stated: “Unlike the interpretation provided by the article, this actually means that the company is in no way able to accept operational risks to infrastructure,” and that their policy is “to always oversee and manage this type of risk with the utmost rigour, adopting all appropriate preventive caution.”

Transport and Infrastructure Minister Paolo De Micheli said on Thursday that “anyone who has a public role (in infrastructure care) must pay.”

Luigi Di Maio, Five Star Movement (M5S) leader and Foreign Minister said on Thursday “we will continue our battle to strip (Atlantia) of its motorway concession.”

Atlantia has reportedly made keeping the motorway concessions a condition for its taking part in the financial rescue of troubled Italian airline Alitalia.

Work on a new bridge is now underway in Genoa.