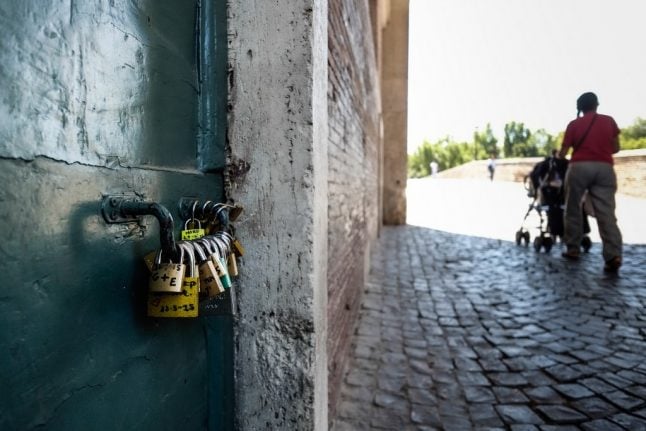 There's always a way to get around barriers in Italy. Photo: Andreas Solaro/AFP

Here's an allegory for living in Italy.

Recently we had a knock on our door at around 5pm. It was our neighbour, a very kind but somewhat doddery widow who lives up the street.

I invited her in as she was clearly distraught. It was dark and cold and she was shivering in a light, button-up sweater. In a mixture of regional dialect and Italian, she frantically explained that she had locked herself out of her house. She wanted to know if I knew some way to help her get in.

Now after living in Italy for over two years, I know enough Italian to have a conversation. But I will never completely understand the local dialect, which is still spoken by most older folks here.

So I was immensely pleased that I could understand this woman who was clearly agitated and talking very fast. I viewed it as passing a sort of cultural milestone.

I went with her to look at the door. A neighbour lady was standing there, wringing her hands. Both women were looking pretty sad, standing in the cold evening air. They were looking to me, the strange resident americano, to solve this problem.

I examined the door. It was a type with a flange that covers the gap, preventing the usual trick of sliding a credit card or stiff piece of card in and releasing the pin. This was not going to be easy.

Do I call a locksmith? I had not done that before here; I had no idea where one even was. Certainly not in our tiny village.

Call the police perhaps? That seemed extreme. In past places I’ve lived, taxi drivers carried thin metal bars to pop open car doors. But there are no taxis in these parts. I was vexed.

I might have just thrown up my hands, shrugged, and let her try someone else in town with more experience in opening heavy Italian doors.

But that seemed like I would be shirking a civic duty to be a good neighbour. After all, in the Italian civics class I took, “contributing to the community” was stressed as a source of national pride. Guilt was now added to the situation.

READ ALSO: 'There's no privacy setting': Swapping the big city for a small town in Italy Then I had a brainwave. A workman who had been doing some repairs at our house had left a heavy metal pry bar behind. I ran back to fetch it, trotting back with the long piece of heavy steel triumphantly held high. But at that point I actually had no idea if I could make it work.

I stuck the chiseled end into the narrow gap near the lock and leaned on it, using it like a lever. In my mind, I was just about to shatter my neighbour’s door frame, leaving a mess and likely making the situation worse.

Within a few seconds the door popped open. I heard all three of us gasp. It worked! Our neighbour was so happy she hugged and kissed me.

Since then we have applied this little tale to other things that are frustrating – like dealing with Italian bureaucracy.

The moral of the story is that there is always a way to unlock anything. It just requires a forgetful handyman.