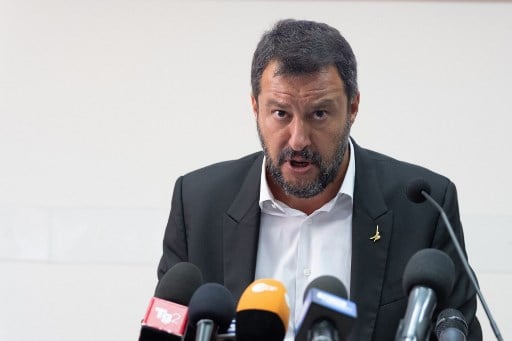 The protests have been organised amid concern that populist Salvini is planning to speak at venues in Liverpool and London this spring, the Liverpool Echo reported.

Tickets are on sale at £28 (€33) a head for what appears to be a dinner event being hosted by Lega nel Mondo, an international network established by Salvini in 2018.

Advertisements suggest Salvini will be speaking at as-yet undisclosed venues in the UK and Ireland in March and April.

A screenshot of one UK event being advertised online.

The event website is very vague, and invites supporters of the Italian politician to email for further information.

Lega nel Mondo had not responded to requests for comment at the time of writing.

In Liverpool, anti-racism groups quickly responded by organising a peaceful protest which, the Echo reports, will take inspiration from the 'Sardine' movement that has recently sprung up in Italy to protest the politics of Salvini and other right-wing figures in the country.

The protest movement began as a flash mob protest in Bologna in November, at which organisers said people would be “packed like sardines” into the city's main piazza. A “sardines” protest against Matteo Salvini and the League party in the Italian city of Florence in December. Photo: AFP

The anti-Salvini protest in Liverpool is being organised by Unite Against Fascism (UAF) and Stand Up to Racism and is being supported by Labour politicians and other groups.

A spokesperson for UAF stated: “No venue in Liverpool should host such a person as Salvini. Liverpool of course is a proudly, multicultural city with great anti fascist traditions.”

Salvini has been he subject of five criminal investigations within the past two years. He is currently the subject of one ongoing trial and numerous lawsuits.

It was confirmed on Wednesday that Salvini is now also to stand trial on charges of illegally detaining migrants at sea, after senators upheld a vote by the lower house to strip him of his parliamentary immunity. If found guilty in this case, Salvini could face prison.

READ ALSO: More than half of Italians think racist attacks 'can be justified', poll finds