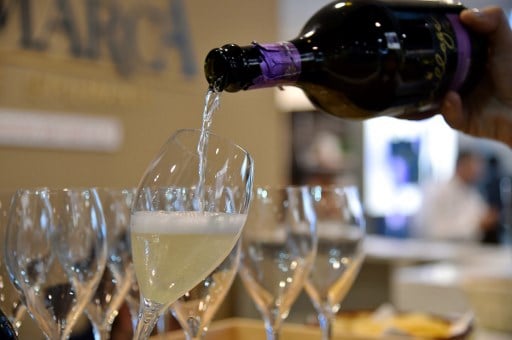 In the economic capital Milan, just 60 kilometres from from the main outbreak, bars have transformed aperitivo, the Italian version of happy hour, into “aperitiviruses”, where aperitifs and snacks can be bought at a discount.

READ ALSO: Life goes on as normal in most Italian regions despite coronavirus outbreak

At the Gelateria Infinito shop on the outskirts of Cremona – another area of the Lombardy region reporting many cases – customers can get a “Corona Cake”, which features the distinctive crown-like spikes of the COVID-19 virus.

“We know that this is a serious issue, but sadness and fear won't solve problems,” owners Andrea Schirali and his wife Daniela told local media. “It doesn't matter if we sell it or not. What matters is that it makes you smile and slightly eases the tensions that have arisen “

“The important thing is to follow instructions and stay calm. If we eat a good ice cream in the meantime, it certainly can't hurt,” they said.

One bar in Milan advertised “aperivirus” hour with the slogan “Don't drink all that fear. It's better to have a glass of wine.”

There's fun to be had even by those in obligatory isolation in red zones, with only their social media feeds for company.

Virus jokes have gone viral, and as per tradition they target Italy's famous flaws, from its public transport to its mafia.

One gag shows a city mayor boasting that the metro's delays are actually helping keep his citizens safe, because “the waiting time is longer than the (14-day) incubation period!”

Another has a drug dealer offering hashish or cocaine, but his client demands “Amuchina” — the most famous hand sanitiser gel in Italy.

READ ALSO: Why has Italy seen such a huge leap in coronavirus cases?

The mafia's reputation for latching on to new trends is also a target for the online jokers.

One mock-up video shows a Naples mobster proposing to a fellow gangster that they switch from cocaine smuggling to Amuchina.

“Demand is skyrocketing for Amuchina, it's been nicknamed 'transparent gold', and colleagues in Honduras are transforming their labs to produce Amuchina,” he says.

The jump in the gel's price on some internet marketplaces since the virus hit Italy prompted several joke adverts, with one offering to swap “five litres of Amuchina for a 2019 Audi RS5”, a vehicle costing some 100,000 euros.

Another circulting on Whatsapp featured a joke advert reading: “Buy a bottle of Amuchina gel, get a Rolex free.”

Fun has also been poked at measures put in place to prevent the virus from spreading, derided by some as draconian.

In one video doing the rounds an elderly woman sneezes. A second later, a special forces team breaks into her house through the door, window and roof.

Not all of the buffoonery has hit the mark.

Police were investigating a man in northern Italy Thursday who had claimed on social media to have the virus and advised all those he knew to get tested – before finally admitting it had been a joke.