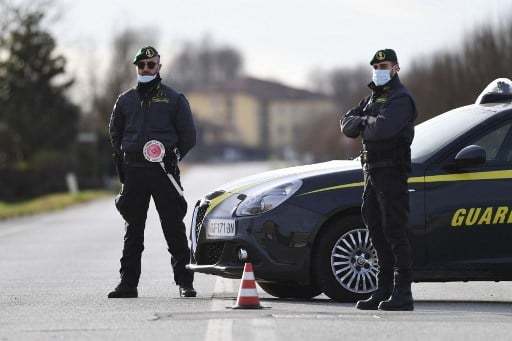 Italian police man a roadblock outside one of the affected towns in Lombardy. Photo: AFP

Italian health officials said on Monday they were “optimistic” that measures currently in place would be enough to contain the outbreak.

The number of confirmed cases of the novel coronavirus in Italy increased to over 2,000  on Monday night.

These numbers are changing constantly so you can view the latest figures here.

Government measures aimed at tackling the new coronavirus include the lockdown of several towns and closures of public spaces. More funding was also announced on Sunday for tackling the outbreak, as well as for helping businesses affected.

READ ALSO: How concerned should you be about the coronavirus outbreak in Italy?

The next seven days will be “decisive” in stopping the spread, said the head of Italy’s National Health Institute Silvio Brusaferro.

“At the end of the week we will understand if and how much the containment measures put in place have slowed the epidemic,” he told local media at a press conference on Monday.

“We expect positive results, I am optimistic. We ask all citizens for collaboration. Their help is important for breaking the chain of infections,”

He said the cases being confirmed now were likely to be people who were infected before the measures were put in place.

Researchers last week said the virus could have been “circulating for weeks” undetected in Italy. Italy has carried out more than 21,000 swab tests for coronavirus so far, the Ansa news agency reports.

These blanket tests were deemed necessary as, unlike with cases in other European countries, Italy was unable to identify a “patient zero” at the beginning of the outbreak, making it difficult to trace people who may have been infected.

Here are the measures taken by authorities so far.

Which Italian cities are affected?

In the majority of Italian cities, including Rome and Florence, little has changed. For most residents life continues as normal.

Some northern cities, particularly Milan and Venice, have seen disruption since the outbreak began, with many schools, museums and other public buildings temporarily closed last week as a precaution.

Most cases are still concentrated in the regions of Lombardy, Veneto and Emilia Romagna but almost all of Italy's regions now reported cases of the virus.

One in Italy's north covers the worst-affected areas in two northern regions, Lombardy and Veneto, where a total of 11 small towns and 50,000 residents at the centre of the outbreak have been locked down.

Authorities have stopped people entering or leaving these areas without a permit. Travelling to these areas is not recommended, and may result in you being unable to leave for several weeks. However, these small areas are not located near major Italian cities or tourist attractions. The second “yellow” zone contains Milan and the province of Lombardy, and also includes the
Veneto region of Venice and Bologna's Emilia-Romagna.

Schools and universities there will remain closed at least until the end of the week.

The surrounding ski resorts will stay open on the condition that the lifts are only operated at one-third capacity.

The third zone covers the rest of the country.

In southern Italy, where only a handful of cases have been detected so far, life continues as usual.

Are there any other travel restrictions?

There are currently no further travel restrictions in place in Italy, and no government has imposed a blanket ban on travel to the country although countries are advising residents against travelling to the worst-hit regions like Lombardy.

However the United States has issued a Level 3 travel warning for Italy, advising against all non-essential travel to the country due to “widespread community transmission” of Coronavirus.

If you're arriving in Italy by plane, expect to have your temperature checked upon arrival – either by thermal scanners or with a thermometer.

The Italian government has urged tourists not to abandon travel plans, stressing that most of the country currently remains unaffected by the outbreak.

“Out of over 7,000 towns in Italy, just over a dozen are affected by this epidemic,” stated Italy's foreign minister Luigi Di Maio on Thursday. Some Italian regions and municipalities chose to shut down schools as a precaution last week. Most schools in the country are now open.

In the three worst-affected regions – Lombardy, Veneto and Emilia-Romagna – many schools are still closed as of Monday.

Which events have been shut down?

In many areas in northern Italy, public activities such as carnival celebrations, church masses and sporting events have been cancelled since the outbreak began.

And some major upcoming events including trade shows and Serie A football matches have been cancelled or postponed.

READ ALSO: The everyday precautions to take against coronavirus if you're in Italy

Sporting events and competitions “of all types and disciplines, in public or private places” are suspended in the regions of Emilia-Romagna, Friuli Venezia Giulia, Lombardy, Veneto and Piedmont.

However, not every Italian region is currently cancelling events. (CLICK HERE for the full list of events affected.)