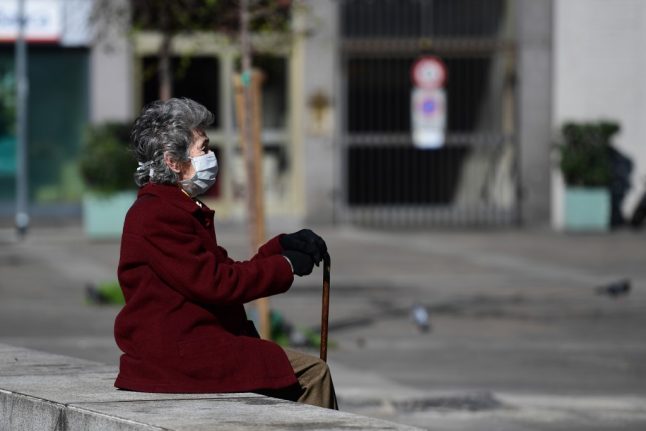 A woman in Milan. Italy's coronavirus victims had an average age of 81. Photo: Miguel Medina/AFP

This is the total number of people in Italy confirmed to have contracted the virus since the beginning of the outbreak, a figure which includes the deceased and 724 recovered patients.

(These numbers are changing daily: view the latest figures here.)

Italy has the highest number of fatalities related to the virus outside China.
What do we know about those who have died?

The vast majority of cases (over 5,000) as well as deaths (333) have been in Lombardy. The large majority of the deceased were male, and all were Italian citizens, government data shows.

Many were in their 80s or 90s, and were already suffering from serious health problems, including cancer, when the coronavirus infection was detected.

READ ALSO: The everyday precautions to take against coronavirus if you're in Italy

But while Italian health officials have been quick to point out that the people who've died so far have had an average age of 81, many of them with pre-existing health conditions, that fact does very little to reassure people – particularly in a country with a population as elderly as Italy's.

EU statistics show Italy has the oldest population in Europe by almost any count.

It has the lowest percentage of young people, and a higher percentage of those aged over 65 (22.6 percent as of 2018) than any of the other member EU states.

Its median age is now 45.9 years compared to the EU's median of 42.8, higher than any other European country except Germany.

The country's particularly elderly population was cited as a factor in the government's decision to close down all schools in the country until at least March 15th. While the infection rate among young people appears to be low, there are concerns that schoolchildren may more easily pass on infections to their older family members, particularly in a country with such close-knit family ties.

“The measures introduced in these days aim to avoid a large epidemic wave,” Italy’s National Health Institute said in an emailed statement on Thursday.

“In the case of the coronavirus we must consider the fact that Italy has an elderly population, actually much older than the Chinese one, which needs to be protected from the contagion.”

Italian health authorities also advised people over 75 years of age to stay indoors and limit social contact for the next month. The same advice was given to over-65s with health conditions, and to anyone with a respiratory illness.

Is Italy's fatality rate really higher than the global average?

A look at global statistics gives the impression that Italy has a particularly high death toll. But how true is that?

While the global case-fatality ratio for the coronavirus is still being assessed, it is currently estimated at 3.4 percent by the World Health Organization – up from their previous provisional figure of two percent.

This figure is based on WHO studies on Chinese patients. Experts say this figure is likely to change again and add that many cases are probably not being detected.

Infections have probably been underreported given that many are asymptomatic or very mild, the WHO said.

According to Italian government data, 4.25 percent of people confirmed to have the coronavirus in Italy have died, one of the highest rates in the world.

However, again, it is difficult to obtain an accurate figure because of the high probability that many cases both in Italy and globally are going undetected.

Many also believe the fact Italy has carried out tens of thousands of tests on people in the country is one reason why the number of detected cases appears so high. As we wrote last week, Italy was left with little other choice but to conduct blanket testing.

More than 80 percent of patients infected with the virus have mild disease and recover, while 14 percent have severe diseases such as pneumonia, the WHO stated.