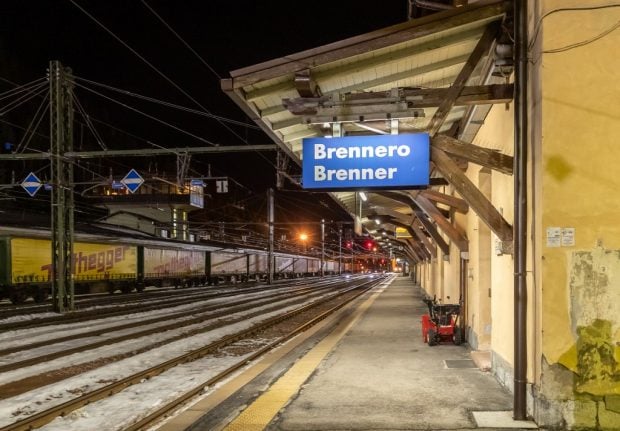 An empty platform at the railway station in Gries am Brenner at the Austrian-Italian border is pictured on February 23, 2020. AFP

Austria — which is also banning big gatherings — ordered a halt to flights and trains from Italy, while Slovenia said it would close its 232-kilometre (144-miles)-long border with the country.

“Nobody there (in Italy) should be travelling abroad, but since nobody is obeying that order, we decided to take measures,” Slovenia's outgoing prime minister Marjan Sarec told reporters.

“It is not a hermetic closure… It is a necessary move if we want to contain the virus from spreading out of control,” he added.

Sarec said border controls would be put in place “as soon as possible”. Cargo transport will not be affected.

Also exempted from Austria's travel ban are cargo transport, people with a doctor's certificate, and returning Austrians who agree to a two-week quarantine, the Austrian government announced.

“The priority is to stop the spread of the virus,” Chancellor Sebastian Kurz told reporters earlier Tuesday.

Some train services between Italy and Austria were still running Tuesday but that was expected to change, a spokeswoman for Austrian rail operator OeBB told AFP.

By extension, train services from Venice in Italy to Munich in Germany via the Brenner pass border crossing with Austria will also be stopped, said a spokesperson for German rail operator Deutsche Bahn.

In line with the ban, Vienna's state opera is cancelling all its concerts until March 31 in a “very painful” move, director Dominique Meyer said, adding the opera would need state aid for their lost revenue.

Universities and other higher education institutions have been ordered to halt classes from late Monday.

So far the Alpine EU country of more than eight million people has reported 182 confirmed cases of the new coronavirus and no deaths.

Slovenia has reported 32 coronavirus cases so far among its population of two million and no deaths.

The coronavirus outbreak has killed 631 people in Italy and forced the government to restrict movement for its 60 million citizens.

READ ALSO: The train routes connecting Italy to the rest of Europe in 2023

So far the journey between Rome and Milan has taken two hours and 59 minutes on the fastest connection available, between the two cities’ main stations of Rome Termini and Milan Central.

The two stations are connected by roughly 565 kilomtres (350 miles) of track on which trains can reach maximum speeds of 300 Km/h.

Ticket prices listed on the operator’s website began at €78.90 for an economy single.

The new connection does not stop at Rome Termini and Milan Central, a decision which Trenitalia said was intended to “reduce congestion” at the main stations.

“Thanks to other modes of transport, including the underground or urban (light) railway services, it’s possible to quickly reach the centres” of the two cities from Tiburtina and Rogoredo, the company said.

The new link brings the number of daily Frecciarossa connections between Rome and Milan to 90, seven of which are direct.

There are 81 other Frecciarossa Rome-Milan routes involving changes, with total journey times from three hours and eight minutes.

Meanwhile Italy’s other high-speed rail operator Italo operates a total of 64 connections between the two cities daily with a journey time of three hours and ten minutes.