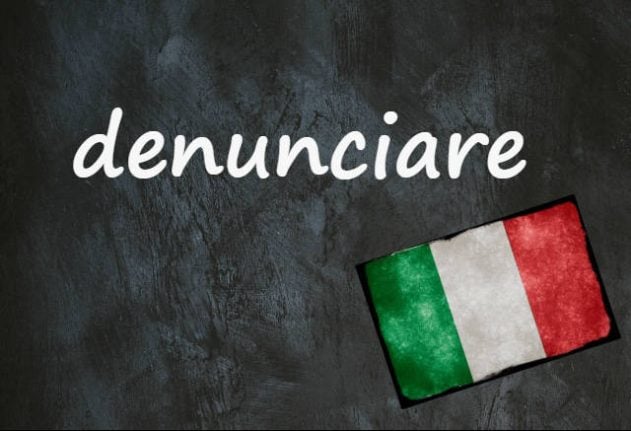 Let's start with the infinitive. Denunciare means 'to report' or 'to declare', and not only bad things: you can report your income to the taxman, for instance, or a birth to the registry office.

Per i residenti in Italia, è obbligatorio denunciare i redditi esteri.
Residents in Italy must declare their overseas income.

But it's also the verb to use when you're reporting bad news, like a crime.

Vorrei denunciare un furto.
I'd like to report a theft.

And that's where “ti denuncio” (or for multiple people, “vi denuncio“) comes in.

You might have heard this phrase bandied around in Italy: by a pedestrian fuming at a driver who runs a red light, for instance, or a furious diner who thinks the waiter's just ripped them off.

It means 'I'll report you!' and in Italy, it's the verbal equivalent of shaking your fist at someone.

Reporting someone to the authorities is a threat Italians make a lot, whether it's to call the carabinieri, start a lawsuit, demand a tax audit, summon health and safety officers or something more abstract.

Se torni, ti denuncio per sconfinamento.
If you come back, I'll report you for trespassing.

We'd love to know how many of those threats ever get followed through, because denunciare typically seems to be something you say you'll do rather than actually, you know, doing.

It's worth noting that denunciare has a more figurative sense of bringing something to light, like 'to expose'. So perhaps when you threaten someone with “ti denuncio“, perhaps what you're implying is simply that you'll reveal them for the rogue they are.

You'll notice there's one definition we haven't given: the one denunciare sounds most like, 'to denounce'.

While the two come from the same root – the Latin nuntius, or 'messenger' – the English and Italian versions aren't used in quite the same way. In English it's relatively rare to 'denounce someone' (i.e. inform on them to the authorities), while the more common usage of 'denouncing something' (i.e. criticizing it) is better rendered in Italian by the verbs criticare or condannare.

In other words, when you hear denunciare from an Italian, they're not just disapproving – they're calling the cops. Or at least, they're saying they are.