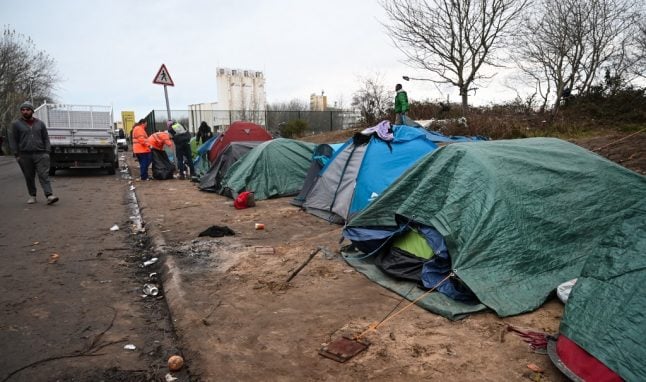 Migrants walk next to makeshift tents set up at a camp in Calais, northern France: AFP

Syrian refugee Mahmoud Ajlouni was due to pick up his new German residency permit last week but found the door firmly shut at the processing office in Berlin.

“I had an appointment,” he said, adding he has “no idea” when he'll be able to replace the flimsy sheet of paper that is his only official identification.

For Ajlouni, the uncertainty could last weeks if not months as Germany has suspended refugee intake programmes or asylum seeker hearings amid the coronavirus pandemic.

Beyond Germany, fears are also growing about the fate of migrants and refugees in the bloc as Europe takes increasingly stringent measures to fight the contagion.

With Europe now the epicentre of the coronavirus pandemic, the European Union has slammed shut its external borders to halt the spread of COVID-19.

Countries like France, Spain and Italy have also imposed lockdowns on their populations to restrict movements and halt the spread of the virus.

Migrants and asylum seekers have become one of the most vulnerable groups hard hit by the crisis as public services that usually tend to the group are wound down.

Aid groups have also warned that already poor conditions in camps including in Greece could worsen, while tense scenes have already erupted in refugee accomodations in Germany.

'Disinfectant and nothing else'

In Suhl, eastern Germany, 200 police were called in after brawls broke out in a refugee home where 533 people were quarantined.

Twenty-two were sent for confinement in a former juvenile prison. The quarantines had been ordered after several cases of COVID-19 were detected among refugees in Germany.

Meanwhile people are only allowed to claim asylum at present if they can show a negative test for COVID-19 or after submitting to 14 days of quarantine.

Volunteers and non-government organisations fear that locked up in close quarters, with shared bathroom and kitchen facilities, the confinement will do little to slow the virus' spread.

“Kids are still running around in the corridors,” said Sophia, a volunteer working especially with Afghan families in a Berlin home.

“There's disinfectant for people's hands at the entrance, but otherwise nothing much,” she adds, complaining further that now visits from outside are banned.

In the Calais area in northern France, lockdown measures and fear of infection have reduced the numbers of volunteers working with the 2,000 migrants there, putting an end to food handouts.

“If the virus does spread inside a camp, it's going to turn into a disaster,” warns Antoine Nehr of NGO Utopia 56.

The situation is particularly worrying in Greek islands, where thousands of migrants are packed into camps without access to basic hygiene facilities.

“If people aren't evacuated from the islands, this is going to lead to a health catastrophe over the medium term,” MEP Erik Marquardt of the German Greens party said by phone from Lesbos, where many migrants land after the short crossing from Turkey.

German NGO Pro Asyl has urged “European solidarity” to take in migrants from the island camps, including “more than 10,000 minors”.

Berlin has said it is ready to take in some of the 1,600 children the EU plans to evacuate.

For those left behind, Greek authorities have issued strict movement restrictions. Doctors without borders is attempting to inform people on the islands about the virus. Nevertheless, “there's not much point distributing flyers with hygiene advice if people are sleeping packed together in tents and can't keep their distance,” Marquardt said.