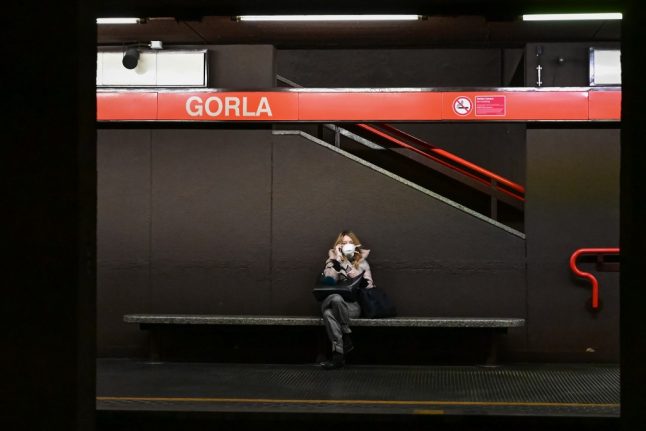 People travelling on Milan's metro have to keep at least a metre apart. Photo: Miguel Medina/AFP

Since March 22, Lombardy residents can no longer exercise outside or walk their dogs more than 200 metres from their house.

Lombardy has been fighting the COVID-19 pandemic longer and harder than any other part of Italy, accounting for around 50 percent of the country's more than 59,000 cases since the outbreak began.

It was the first region to put multiple towns under quarantine, measures that were extended over the entire region before eventually being rolled out nationwide.

But reports indicated that some continued to abuse the rules, with data collected by the authorities from mobile phone companies suggesting that as many as 40 percent of Lombardy residents continued to travel more than 300 metres from their homes.

On Saturday the regional president, Attilio Fontana, who has pushed for tough restrictions across Italy, signed an ordinance bringing into force the strictest lockdown rules yet to apply to an entire region.

“This is the most restrictive ordinance that regional powers allow us to issue – we can't do more than this,” said Fontana.

“We did it with the conviction that it was necessary, the only way is to make people understand that they have to stay at home.” 'Stay at home': a message to the public in Milan. Photo: Miguel Medina/AFP

Effective from March 22 until at least April 15, Lombardy's new rules include:

No more sport outside

You can no longer go for a walk, run, bike ride or any other form of exercise in public, even by yourself. (You can continue to exercise in your garden, if you're lucky enough to have one.)

Anyone caught breaking the ban on “public gatherings” – defined as more than two people together in public – risks a fine of up to €5,000, nearly 25 times the €206 fine applicable in the rest of Italy.

Anyone taking their pet out must carry a justification form and is forbidden from straying more than 200 metres from their home. No visits to your second home

Residents are expressly forbidden from staying anywhere other than their main residence, including any other properties they may own.

All tourist accommodation, including hotels, Airbnbs and agriturismo farm stays, must close and guests should leave within 72 hours (so by the end of Tuesday, March 24).

However, those in the following circumstances will be allowed to stay:

University dormitories, homeless shelters and accommodation managed by religious orders are not subject to the restrictions.

One person per family at the shops

Only one person per household at a time will be allowed to enter shops, unless you can prove that you need assistance from a second member of your family. Vending machines selling food and drink are no longer allowed to operate.

All construction work is suspended unless it's to build or maintain vital infrastructure, or to repair a structure that poses a risk to public safety.

Like in the rest of Italy, only essential shops – supermarkets, pharmacies and newsagents – remain open.

READ ALSO: Here are the businesses that can stay open under Italy's latest quarantine rules

But while the national government's list of indispensable industries is fairly long, Lombardy has limited it further, notably ordering engineers, architects, notaries and other “professional offices” to shut.

Lombardy's ordinance recommends systematically checking the temperature of people working in key sectors, such as factory workers and supermarket cashiers, as well as their customers.

It also encourages police to take the temperature of anyone they stop in public.

You can find the full ordinance online here (in Italian).

All regional governments and local mayors have the authority to impose extra restrictions on top of the ones ordered nationwide. Check the website of your local comune or region for the latest quarantine rules that apply where you are.