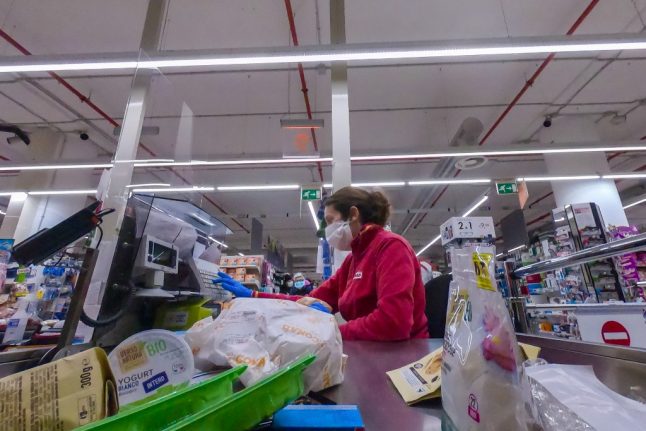 Trapped behind checkout counters for hours at a time, or stocking shelves amidst customers on supermarket floors, workers say they are in over their heads on the front lines and insufficiently protected.

A 48-year-old supermarket cashier who tested positive for coronavirus died in March in Brescia in Italy's hard-hit north.

That raised questions about whether enough was being done to protect workers.

Unions say others employed in the sector may have died without their cases being reported as coronavirus cases.

“We're scared of bringing something back home with us,” said Piera, a 31-year-old part-time cashier. She has worked for over a decade at a superstore in Novara, west of Milan, the city where the security guard died. Workers who spoke to AFP asked that their last names not be used.

Piera has been given disinfectant gel, gloves, and a mask, which she must wash herself for reuse. It was only last week that the store installed Plexiglass shields in front of each checkout counter.

Grocery workers say many customers don't wear masks or gloves, and continue to shop daily, increasing the chances of passing on infection.

“They're buying stuff that I wouldn't be buying in an emergency,” said Chiara, a cashier at a supercenter in Rome, listing “Sushi, Nutella, beer…”

Most disheartening, she said, was seeing people act as though they are immune to a crisis that has killed nearly 12,500 people and infected over 100,000 in Italy.

Entire families show up to shop, some get too close to workers, and a few persist in “licking their fingers” before counting out their bills, Chiara said.

Last month, a man was arrested in Genoa after spitting in the face of a supermarket cashier, local media reported.

Unions have called for the government to require grocery stores to cut hours in order to relieve the burden on workers.

But Prime Minister Giuseppe Conte – hoping to reduce panic and runs on supermarkets – promised Italians on March 21 that stores will stay open.

Some local authorities, such as Rome's city council, have instructed supermarkets to reduce opening hours.

The two hardest-hit regions of Lombardy and Piedmont, in the north of the country, recommended that markets take shoppers' temperatures before being allowed inside.

But only some have done so, with others saying they cannot get hold of the thermal scanners they need.

In an open letter published on March 24, the secretary general of the Fisascat-Cisl union, which represents store cashiers and janitors, deplored the “almost total lack of any precautions” taken by the industry to protect its workers.

The main supermarket association in Italy, Federdistribuzione, has not issued specific coronavirus regulations to members, a spokesman told AFP. Instead, individual chains are taking measures. Their precautions include putting up signs instructing customers to maintain safe distances, equipping staff “as far as possible” with gloves and masks, and limiting the number of people who can enter stores, said the group.

Some supermarkets including the A&O chain have been telling customers they cannot enter unless wearing a mask.

At another Rome store, cashier Corinne said new Plexiglass screens installed last week made her feel safer, but the barrier, along with gloves and mask, made her job harder.

Worse, she said, was dealing with customers who are themselves visibly anxious.

“We're also stressed out, but we can see that they're pretty stressed, too,” she said.

Workers struggle to control a constant fear of touching something, or someone, contaminated, said Chiara.

“You start thinking, 'Oh God, I just touched my face, you get kind of paranoid,'” she said.

Colleagues have had meltdowns, and some have called in sick to avoid going to work, workers said.
Those who spoke to AFP, said that in their stores staffing had been cut by as much as a third, with some workers on sick leave or using vacation to care for homebound children.

Piera said she and others felt disregarded, and in need of “courage” to go to work every day. A Facebook page she set up in 2010, “Confessions of a Cashier,” helps revive morale, with workers in the field sharing stores and commiserating.

“Some say we're heroes,” Piera said. “I don't think so, we're just doing our jobs, even though we're overlooked.”

“I don't want to be a hero. Just respected, that's enough.” 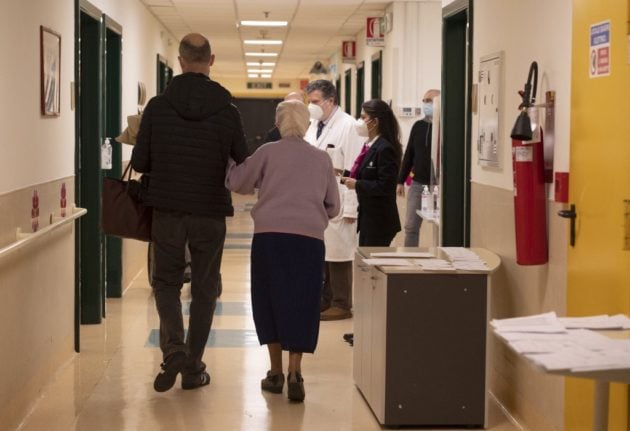