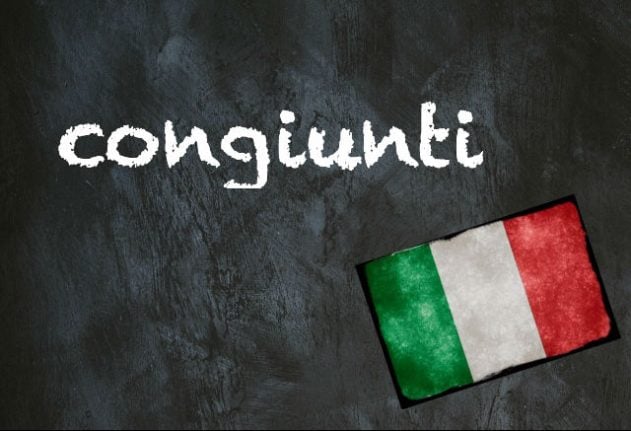 There are reports of a sudden spike in internet searches for the word congiunti, which has also leapt to the top of trending terms on Twitter.

People in Italy have a pressing reason for wanting to know what exactly the word means: when Italy's coronavirus lockdown rules are loosened next week, the government just announced, congiunti are the only people we'll be permitted to visit.

Q&A: What are Italy's new rules on going outside in lockdown phase two?

So who are they? A congiunto is a 'relative' or 'relation', in a fairly broad sense.

It comes from the verb congiungere, 'to join together' (or 'to conjoin', to use its closest English relative), which describes the action of uniting or linking something, whether figuratively or literally.

In its reflexive form ('to join oneself'), you can use the verb to describe getting married, or rather 'joining in matrimony': congiungersi in matrimonio.

Its past participle, congiunto, can be used as an adjective or a noun to describe either something that's 'joined' – like le mani congiunte, 'joined hands', or un conto congiunto, 'a joint account' – or someone you're 'joined' to: your 'relatives'.

In questa sala possono entrare solo i congiunti.
Only relatives may enter this room.

But many of the Google searches of the past 24 hours have been seeking a more specific definition: is a girlfriend or boyfriend a 'relative? The Italian government has since offered its own definition: i congiunti, official sources indicate, should be considered “relations, in-laws, spouses, cohabitants, long-term partners and loved ones”.

Given that they'll soon make up the whole of our social circle – after six weeks of no social circle at all – we can be glad the word is so flexible.