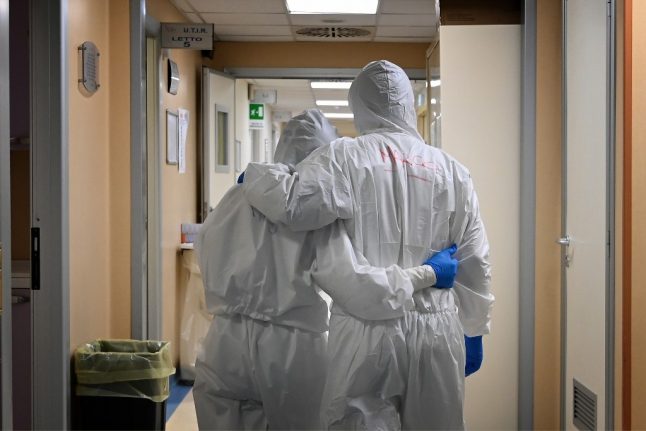 A doctor and nurse embrace in an intensive care unit in Rome. Photo: Alberto Pizzoli/AFP

The number of coronavirus patients currently in intensive care fell by 53 on Monday to 1,956, according to official figures on Monday from the Civil Protection department, marking the first time in more than a month that the number has been under 2,000.

The number of people in hospital fell by more than 1,000 in total in the past 24 hours.

Another 1,739 cases of the new coronavirus were confirmed in the past 24 hours, compared to 2,324 the previous day. The daily rate of increase stands at 0.9 percent.

In total at least 199,414 people in Italy have contracted the virus since the outbreak began, and 26,977 of them have died – more than anywhere else in Europe and second only to the United States.

The total includes at least 151 doctors, according to the FNOMCeO health association.

The regions of Basilicata and Molise reported no new cases on Monday, while Umbria and Sardinia confirmed just two and three more respectively.

Italy is preparing to relax the strict lockdown measures that are credited with slowing down its epidemic, with reopening set to begin in phases from May 4th.

The government has warned that any freedoms restored could be taken away again if the number of new infections shows an increase.