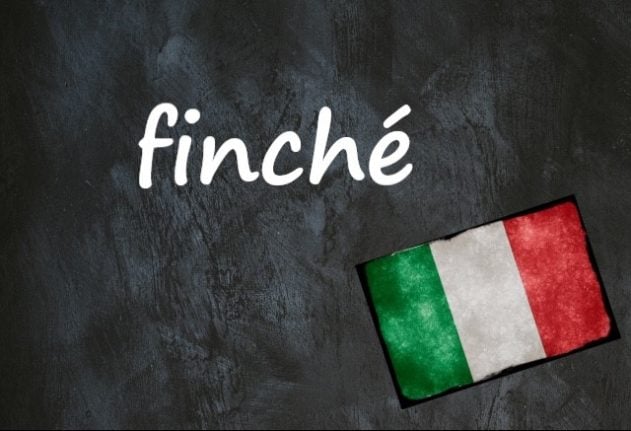 Today’s word is one that is commonly muddled up by Italian language students.

Finché and finché non translate quite differently into English, but the two are so easy to confuse that even Italians themselves do it. And even more confusingly, sometimes that’s ok.

So let’s look more closely at how to use them both:

Finché (pronounced ‘fin-keh’) is often thought to mean “until”, when in fact it means “as long as” or “as much as”.

Instead, finché non means “until”

Maybe because this construction is so awkward for English speakers, students often accidentally miss out the non.

But that’s not always wrong.

Sometimes you might also hear Italians use finché when we might think finché non would be correct.

Just as we do in English, Italian speakers abbreviate when speaking quickly and informally, using lots of contractions and missing out words. (In fact, finché itself is a contraction of a fine che.)

– We can keep making pizzas until all the dough has been used up. (or literally: as long as the dough isn’t finished.)

So the meaning here is still clear.

That’s because when the meaning of finché is “until the time that…”, the use of the negation ‘non’ is optional as the sentence should make sense without it.

But – attenzione – sometimes it’s not optional and will change the meaning completely – like when the meaning of finché is “as long as”.

Compare these two sentences and you’ll see what I mean:

– I’ve been fine as long as I’ve been living in Milan.

– I was fine until I lived in Milan.

As you can see, the little non makes a big difference.

Still, with practice you’ll eventually get the hang of the rule, and then you can (maybe) get away with breaking it yourself. As long as (finché?) your Italian teacher isn’t listening.