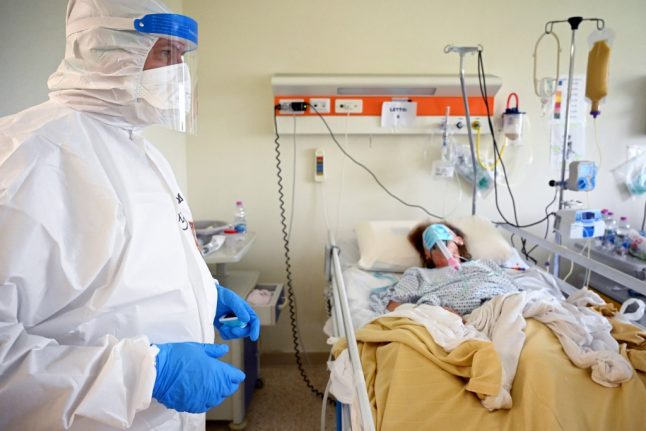 Italian anaesthetist Marino De Rosa, father of two, pinches his mask tight over the bridge of his nose before flipping his face shield into place as he starts his afternoon shift in a COVID-19 unit in Rome.

The 54-year old has a gruelling six hours ahead of him inside Building B of the San Filippo Neri hospital in the north of the capital. Night shifts last 12 hours, though they are shared with another anaesthetist.

“Working 12 hours in a row in these conditions is impossible,” he told AFP.

“The gear is oppressive; you can't breathe properly in the masks, the glasses fog up, it's difficult to read and write. The longest I've lasted is five hours, and I came out utterly frazzled.”

The doctors and nurses looking after patients in the 20-bed unit try not to do more than four hours in the gear at a time.

On Wednesday, 14 of the beds were occupied, some by patients on mechanical ventilation.

“Patient contact is visual. We talk to them, they describe their symptoms. We have a tool that allows us to measure blood oxygen levels, which gives us an idea of the level of respiratory insufficiency.

“But we don't physically examine them. It's difficult, if not impossible, to use our fundamental tool: the stethoscope.”

He and colleagues have been relying instead on chest ultrasounds to get as clear an idea of the situation as possible.

As the weeks have passed, De Rosa has learnt to “put aside” his fear of being infected.

Over 27,000 people have died since the pandemic gripped Italy two months ago, including 150 doctors.

He sees his wife and teenage children daily, but wears a mask and gloves at all times and sleeps in a separate apartment to limit the chance of passing an infection.

De Rosa says his anxiety is counterbalanced by a chance to work on the frontlines of a new illness and help those who are fighting for their lives. “The idea of being one of those people who are really useful to others exhilarates me,” he says.

De Rosa is unable to predict when life at the hospital and across the country could return to normal, but says he and his colleagues expect a new wave of infections after the lockdown is eased on Monday.

He forecasts an increase in new cases in Italy between the end of May and the beginning of June.

You can isolate those who show symptoms, he says, “but the problem of asymptomatic patients transmitting the virus remains, and will not go away”.