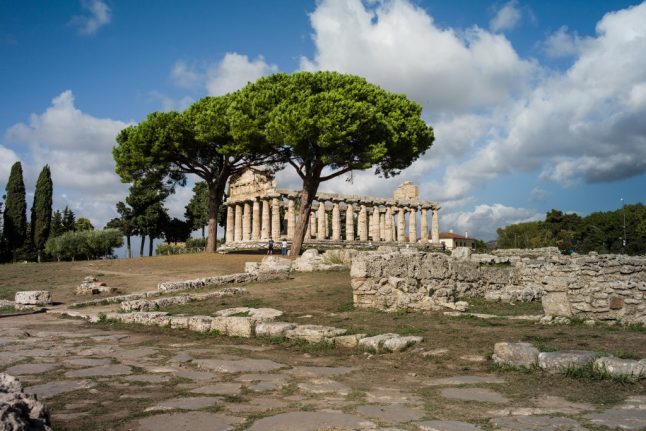 This ancient Greek colony, dating back to the 6th century BC, reopened on May 18th with temperature checks at the entrance and other health measures implemented around the site as lockdown eases.

A limited number of people are allowed on the site at the same time, they must disinfect hands and wear masks, and one-way routes have been marked out, said site director Gabriel Zuchtriegel.

The site has also developed a free app to guide visitors through the sprawling site and send an alert when too many people are gathered in the same place.

“But at the same time we also wanted to give cultural content which does not make visitors experience this situation as a limitation but as a chance to finally return to live with beauty, culture, freedom,” said Zuchtriegel. The Temple of Hera at Paestum seen from above. Photo: Charles Onians/AFP

Zuchtriegel says the post-lockdown phase with fewer visitors to the three remarkably well-preserved temples in the Doric order should be seen as an opportunity.

“We must focus on another type of tourism, another relationship with visitors, more intense, more 'one to one', and who knows, I think this could be a model for developing 'slow tourism' in the future,” he said.

So far visitors to the site have been scarce, but the numbers are expected to pick up when tourists are once more allowed to fly in to Italy from early June.

“After spending two months or even more at home, not going out, you really appreciate this freedom to go outside,” said visitor Svetlana.

“You realise you've been postponing things, thinking: 'Let's go tomorrow, or after tomorrow, or in a month, or not now it's too hot'. No, it's not later, it is now!” she said.

Many Italians remain at home after the over two-month lockdown, including schoolchildren, but teacher Maris has brought her pupils to Paestum via a livestream on her mobile phone.

“I came for the weekend and took the opportunity to take my pupils on a virtual trip, my pupils with whom I've been doing distance learning! They were all connected, and I took them to Paestum, and they loved it,” she said.

Pompeii will reopen to the public on May 26th, while Rome's Colosseum has not yet announced when visitors will be able to return.