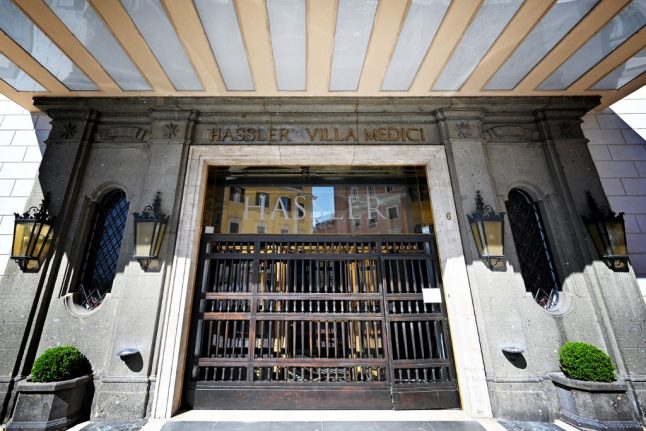 The closed main entrance of a hotel in Rome. Photo: Vincenzo Pinto/AFP

Only 40 percent of Italy’s hotels and other accommodation businesses are currently open, even though the ban on inter-regional and European travel has been lifted, the Federalberghi Italian hoteliers’ association reported on Friday.

While some plan to reopen at some point this month, the report found that more than 20 percent expect they’ll still be closed in August.

In some regions the percentage of hotels reopening is even lower, with only ten percent of all accommodation in Naples now open for business, and bookings in the area reportedly close to zero.

“The summer season is at risk,” stated Bernabó Bocca, president of Federalberghi, presenting the data from the group’s monthly survey at a Senate hearing.

“Reservations languish, telephones do not ring, we are apprehensive about the fate of our businesses,” he said. “The first victims are likely to be the 500,000 seasonal workers who will not be re-employed, and their families.”

The Italian government has now lifted most of the country’s strict lockdown rules, including most travel restrictions, introduced in March in response to the coronavirus crisis.

Travel from outside the EU may also restart as soon as June 15th, though this has not been officially confirmed yet.

It’s hoped that allowing unrestricted travel around Italy, as well as tourism from within Europe, will boost the country’s struggling economy as it faces its worst recession since the second world war due to the coronavirus crisis and the subsequent lockdown.

Italy’s economy is highly dependent on tourism. The sector makes up 13 percent of the country’s output while employing about 4.2 million people, accounting for 15 percent of all jobs in Italy.

But many owners of hotels, B&Bs, agriturismi and other types of accommodation in Italy told The Local that their reasons for not reopening yet go beyond simply not having enough bookings.

Some said they’re not reopening as they’re concerned about being able to enforce strict new rules, or that they just don’t feel that it’s safe to welcome visitors right now.

“The majority of my guests are Americans therefore this summer will definitely be a no-go for me,” said Anna Maria Gilardoni, owner of a lakeview holiday apartment on Lake Como. “I have blocked availability dates until the end of June, as I don’t feel comfortable about having guests in the property at the moment.”

Another holiday apartment owner in Sorrento told The Local she didn’t want “to participate in the possible spread of the virus.”

”This year I’ve canceled all orders, as I feel it is safest for the locals in the area. This year we’re taking a break, and aiming to come back stronger in the summer of 2021.”

On the island of Sardinia, one holiday villa owner said the idea of reopening at the moment was “terrifying.”

“The virus hit in my peak booking season. I’ve been left without money and am surviving on loans from friends. But I’m not opening my doors this year,” she said, explaining that the risks of having an infected guest were too high.

“If someone out of the hundreds on your airplane later tests positive, if you’ve come into any contact at all with a confirmed case, you’re subject to two weeks’ quarantine under the Italian government’s guidelines,”

“As an accommodation owner I’d either be forced to have you stay on for free, cancelling paid guests, or you’d be moved into a “government facility” for the duration of your quarantine. I’ll allow you a moment to imagine how much fun that would be,” she said.

Many of those who said they would reopen are doing so very cautiously, with many small business owners admitting privately that they were still figuring out how they’d be able to stick to some of the stringent rules. Others said they simply couldn’t.

“I’ve decided to close this year as I can’t possibly meet the requirements,” said Gilda, a B&B owner in Tuscany. A hotel owner in Veneto displays a card with safety rules for visitors. Photo: AFP

Others pointed out that a government scheme meant to incentivise tourism could actually leave them out of pocket in the short term.

“We’ve had requests from guests wanting to use the 500 euros off your holiday scheme, but we’re expected to claim the money back through tax credits which could take a long time,” said one small hotel owner in Umbria, who gave her name as Stefania.

“We’ve had no income for so long and are now expected to shoulder these costs and hope for money back later,” she said, adding that there was a lack of information leading to confusion among local accommodation owners about how exactly the scheme works.

Federalberghi is calling on the government to provide more assistance for the sector, with Bocca telling the Senate: “Some of the measures taken so far go in the right direction, but with maddening slowness.”

“We need to increase resources to support tourism and speed up the time taken for measures to come into force,” he said. “otherwise companies won’t make it.”