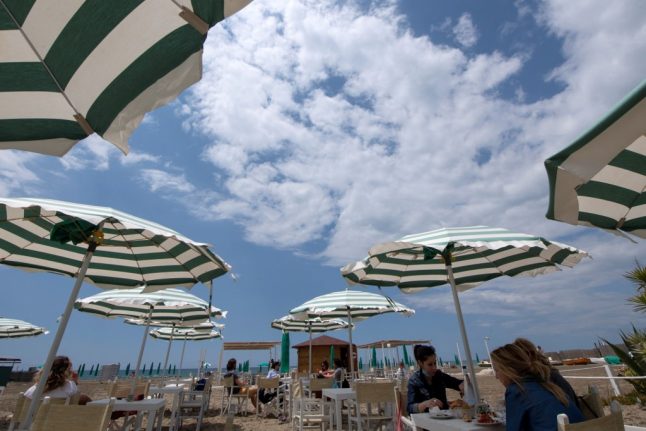 Italy's beach resorts are likely to look very different this summer. Photo: AFP
With masks compulsory on trains and planes, distancing rules on beaches, at museums and in restaurants, and scaled-back leisure programmes in tourist resorts: there's no doubt the 2020 holiday season is going to be anything but normal.
And many people in Italy will simply stay home this year, according to a survey by the opinion research institute Demoskopika.

Only 51 percent of people say they have travel plans this year. And 92.3 percent say they'll be staying in Italy – the highest proportion in at least a decade.

READ ALSO: 'No segways, no crowds, and only Italian spoken': Here's what visiting Rome is like right now

Sicily, Tuscany and Puglia are among the most popular destinations for these travellers.

However, only 5.5 percent of respondents had actually booked a holiday for 2020.

Of those who say they aren't planning on a holiday this year, 25 percent said they were afraid and 16 percent couldn't afford it, the survey said.

Among those struggling the most financially were the self-employed, factory workers, and the unemployed, the survey showed. A separate survey released by Coldiretti/Ixe had similar findings.

Of Italy's 60 million people, around 34 million will take some holiday this year, it said – a decrease of 13 percent from 2019.
Of those, a quarter have opted to stay in their home region despite the lifting of travel bans.
Italian authorities are introducing various discount schemes aimed at attracting visitors this year.

Tourism officials are hoping for an increase in domestic travel this year to offset some of the lost revenue from international tourism.

Overall, Italy's tourism sector has suffered its worst financial losses in 20 years due to the crisis, with analysis by Florence's Centre for Tourism Studies predicting a 3.2 billion euro ($3.6 billion) drop in turnover for the industry in 2020