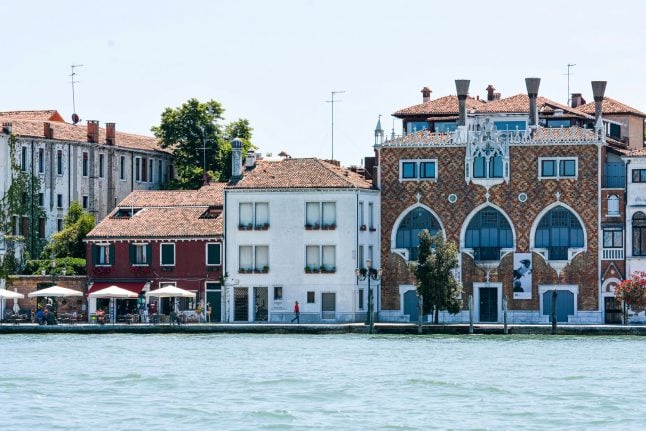 A view over the Giudecca Canal in Venice. All photos: Evan Byrne

With recent news coverage of Venice focusing on demonstrations about tourism, I decided to visit the city at this interesting moment.

Venice was already agitating about its tourism industry and the direction it wanted to take before Covid-19 gave it a taste of what life without tourism would be like. I wondered what the locals were thinking now, with months of closure giving way to a trickle of, mostly, Italians. And no cruise ships.

I also wanted to see Venice without so many people around.

READ ALSO: 'The myth of Venice: How the Venetian brand helps the city survive' I saw almost no police enforcing any regulations. However, with far fewer people on the streets and canals, social distancing was not a problem, and was generally practiced.Upon arrival, it became clear that the prevailing mood about Covid was quite relaxed. There were far fewer masks in evidence than you would see during Carnevale, and only on the vaporetti did anyone insist you wear one.

Despite the impression that the coverage of protests against cruise ships and overtourism may give, the majority of Veneziani either want tourists (around 65 percent derive their income from tourism) or recognise that the city would not be viable without them.

The issue is not tourism per se: it’s what type.

READ ALSO: 'Without tourists, Venice is a dead city': Not all Venetians are glad the crowds have gone Many Veneziani would like to continue welcoming tourists to the city, but have a problem with large numbers disembarking from cruise ships for a coffee and a walk around the city, before disappearing without spending.There is a feeling in Venice that they now have the opportunity to take a different path: to correct their course.

On the face of it, this can appear as though the issue is that the locals want more money from the visitors – and when you pay €8 for a coffee, that idea can raise your hackles. But it is not about that.

One problem with so many large groups hopping in and out of the city, for example, is waste management. This is distinct from waste volume, itself an issue in a city with 52,000 residents – but coping with between 25 and 30 million visitors per year.

There are times when the bins in Piazza San Marco need emptying every half hour – as soon as they are emptied, the round has to begin again. If you have ever seen the crowds, you might legitimately wonder how any workers could reach the bins in any case. And don’t forget that this refuse then has to be transported away on the water and separated into paper, plastic and so on.

Then there are the crushing crowds themselves. I understand why residents might not like this: where I live in Alba, a town of 30,000, I occasionally find myself irritated during the International White Truffle Fair if I can’t find a parking space. Visitor numbers to Alba are hard to find, but it is comfortably below one million per year – more likely half that.

Venice’s old town, given the numbers above, is literally and metaphorically sinking under the weight of tourists.

Whilst there I talked to some residents who work in tourism or hospitality. Diane Benelli, who owns Ristorante al Covo with her husband, told me that initially lockdown was lovely. It was just locals and it felt like a community.

But people have to work. Now that visitors are returning, they, and other restaurateurs, are trying different initiatives, such as catering in other spaces – essentially taking their restaurant on the road (or lagoon) – or hosting events. Diane estimated, “It will be 20 years before numbers are back to previous levels”.

I stopped for coffee at Gran Caffé Chioggia, opposite the Palazzo Ducale. There was one other person there. At 10.30am.

The waiter there told me, as I surveyed the ranks of empty tables, that he was lucky: the café employed 25 people this time last year, and every table would have been full. Now they had two people working the morning shift and two the afternoon. So the issues surrounding tourism in Venice are complex, sometimes subtle and interwoven. It is clear that without tourism, the city would die.

Developing alternative income streams is a very good idea, even a necessary one. But a quick look at post-industrial economies shows how devastating a sudden removal of the economic lifeblood of a city can be.

Even with diversification, it is doubtful that Venice could survive economically without significant tourism: certainly not for decades.

So the city does want you. It even needs you. But there is a groundswell of feeling there that people would like to connect with you, and you with them, in a way that treating the sights as an entity to be viewed in isolation from the city as a whole does not provide.

Simply put, they want you to know and experience their city, not just see the inside of a palace or church. So do yourself and the Veneziani a favour: check out enterprises such as Venezia Autentica, who will provide all kinds of services, from a two-hour walking tour, to visits, and even workshops, at Murano glass makers, or oar and rowlock makers – a craft going back to the 1300s here.

Stay either in a hotel – which employs locals – or have a look at Fairbnb: a co-operative which offers Airbnb-style rentals but donates half of its booking fees to social projects in Venice.

When you can, come to visit, and spend as much time in the cafés, bars, restaurants and artisan shops as you do at the tourist attractions.

The spectacle and the splendour are worth seeing, without doubt, but you won’t get to know Venice itself, even slightly, if you don’t go down the byways and into the bacari.

Evan Byrne is a British wine expert with over 20 years' experience.  He first visited Piemonte in 2001 to work a harvest season, stayed three years and has been Piemonte-based full-time since 2008.  In addition to making and selling wine during his career, he also has a blog, PiemonteMio, and will launch his own wine as soon as coronavirus allows. You can email him here.