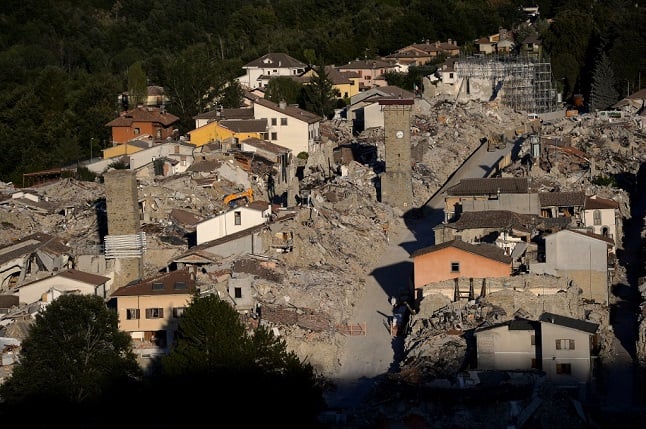 The near-flattened town of Amatrice shown one year after the deadly quake. Photo: Filippo Monteforte/AFP

The 6.0 magnitude quake cost 299 lives when it razed much of Amatrice and pummelled the neighbouring villages of Accumoli and Pescara del Tronto in the rugged, hilly region early on August 24th, 2016.

On Monday church bells sounded at exactly 3:36 am, the moment the quake struck the sleeping villages, as the names of the dead were read out.

In Rome Italian President Sergio Mattarella voiced his “solidarity with all the victims and their families… on a dramatic night which also displaced more than 40,000” people whose homes, work places or schools were hit. But Mattarella said “the work of rebuilding the destroyed localities is unfinished and continues with difficulty,” particularly because of bureaucracy.

In a press release, he called on the Italian state to “demonstrate determination and efficiency at all levels.”

The Italian daily La Repubblica recently published an official report saying that as little as eight percent of rebuilding work had been done in the last four years. The majority of work still in the pipeline “is still far from being completed or has not even started,” the paper reported.

Private projects, however, were further along, it added.

Examples of slow progress include schools, where out of 250 planned projects, 75 have not yet started and 144 others were still in the planning stages. None of the nine hospital projects and none of the 126 municipal projects have begun, the paper added.

Regarding housing, “only seven out of 311 rebuilds have been carried out,” it said.

Some 11,000 requests for public aid for rebuilding had been filed and 526 million euros have been granted by Italy's government. This year several commemorations are planned on site in the presence of Prime Minister Giuseppe Conte, but will be limited in size due to the coronavirus pandemic.