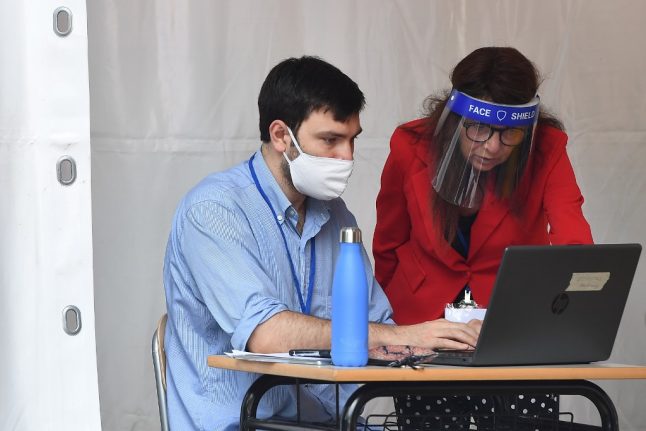 Photo: AFP
Teachers are returning to work from September 1st, and some eight million youngsters are due back in class over the coming weeks after a six-month absence.
School staff are now preparing for the arrival of students, and catch-up lessons for some pupils also began on Tuesday – though many of these are held online.
“Once again Italy is in the front line in developing useful strategies to fight the coronavirus,” Conte said in a tweet.

The safe reopening of schools “today this is our top priority”, he said.
The first country in Europe to be struck by coronavirus, Italy shuttered all schools on March 5th shortly before imposing a strict national lockdown – moves which are were seen as a “gamble” by many at the time, but are now credited with getting the outbreak under control.
However with Italy's new case numbers rising again and authorities unable to agree on some details of back-to-school measures, there is lingering uncertainty about September's school reopening.
READ ALSO:
In August, the government published new protocols to deal with renewed outbreaks of coronavirus which has killed almost 35,500 people so far,
according to official statistics.
The protocols include the immediate quarantine of those who were in “close contact” with a pupil or teacher who tests positive for Covid-19.
Face masks are mandatory for all children over the age of six when in school except for gym class, eating in canteens and answering a teacher.
Italian authorities also said they have also delivered 2.4 million individual desks to allow better distancing, and will hand out millions of face masks and as well as 170,000 litres of disinfectant gel every week.
However some teachers have voiced concerns about everything from a lack of clarity on protocols, to concerns about the potential risks involved with teachers having to travel weekly across Italy to work and back.
READ ALSO: Italy warned schools 'must reopen at any cost' despite new coronavirus outbreaks
Several regions including Puglia, Calabria and Abruzzo have postponed reopening until September 24th, and others are considering doing the same.
Most regions' schools will go back on September 14th, while the Bolzano region restarts classes on the 7th.
“We have a great historical responsibility,” wrote Education Minister Lucia Azzolina in a letter to schools ahead of reopening. “It will be a tough year, but also the beginning of a different path. We will have the resources from Europe with which to build the school of tomorrow.”
“We will find ourselves living with safety rules. I know there is concern, it is understandable,” Azzolina wrote. “No one in Europe has worked as hard over the summer months to prepare schools for the new term.”