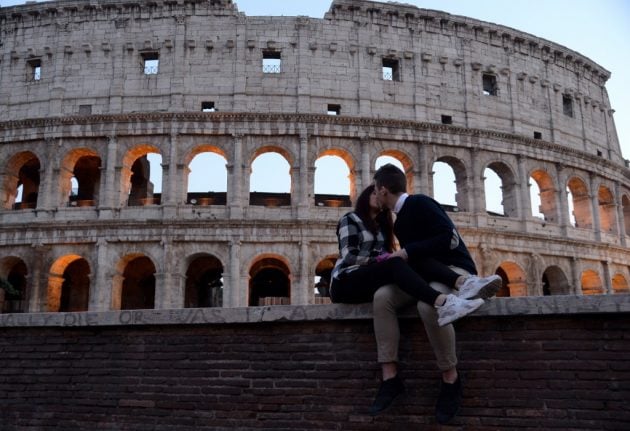 It is now possible for people in Italy to be reunited with their partners living outside of Europe after a rule change on September 7th. Photo: Filippo Monteforte/AFP

The travel rules were relaxed for unmarried couples from September 7th as part of the latest Italian emergency decree signed by Prime Minister Giuseppe Conte on Monday evening.

While most of Italy's travel restrictions remain in place under the new decree, there is an exception to allow the reunification of international couples separated due to the travel rules: partners living abroad can now enter Italy to reach “the person with whom they have a stable emotional relationship, even if not cohabiting.”, the decree text states.

It is not yet clear what evidence travellers must provide to prove their relationship is “stable”.

The change came after thousands of unmarried couples joined the “Love is not tourism” movement, demanding that countries including Italy relax coronavirus rules and allow couples to reunite.

In Italy those with a partner outside Europe have been separated for almost eight months due to travel restrictions. Under the rules in place until now, travel from the US to Italy was possible for the spouse or child of an Italian citizen (among other exemptions to the travel ban.) However, unmarried partners were cut off.

Exemptions were otherwise only allowed for those able to prove they have an urgent need to travel to Italy for work, health, study or emergency reasons.

From September 7th, partners can travel to Italy from non-EU countries to be reunited with their loved one.

However some confusion remains over the details and requirements – particularly as to how authorities will expect couples to prove the “stable” relationship status.

Denmark, Norway, the Netherlands and six other countries had already changed their own travel rules in order to allow partners of their citizens to enter, provided they can show a negative Covid-19 test result.
Bureaucratic hurdles apply in those countries: Norwegian authorities say couples must have met at least once before and have been together at least nine months. The Netherlands says three months, but that couples must have “regularly” visited each other. France wants couples to provide proof of their relationship status to a consulate.
The Italian requirements are expected to be clarified by ministers in the coming days.
The exemption was one of the few changes made in the latest decree, which extended most of the current restrictions for one month.