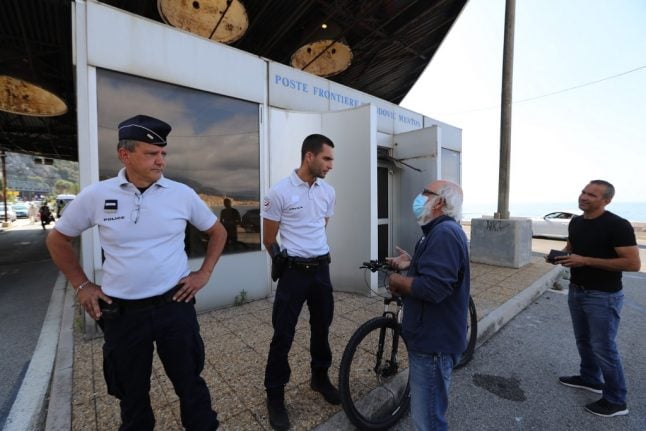 Police at the French-Italian border near Menton. Photo: AFP

Unlike at the height of the pandemic, the border between France and Italy is open and you do not need extra permission forms to travel, nor do you need to prove your trip is essential.

Both France and Italy are allowing all types of travel from within the EU and neither has imposed a blanket quarantine requirement for travellers from within Europe.

However on the Italian side there are testing requirements for travellers from some parts of France, as well as from other countries.

Here's what the rules say;

Travelling from Italy to France – no restrictions. The French government does not have any compulsory quarantine rules in place and has not imposed a testing requirement for travellers from any part of Italy.

Travelling from France to Italy – travellers arriving from certain parts of France face mandatory Covid-19 testing and both the regions that cover the France/Italy border are on this list.

So if you are travelling from Île-de-France (which includes Paris) Auvergne-Rhône Alpes in central France, the island of Corsica, Hauts-de-France in the north, Nouvelle-Aquitaine and Occitanie in the west and south west or Provence-Alpes-Côte d'Azur in the south east you must take a test.

The French Foreign Ministry has clarified that the requirement applies to “travellers who, over the last 14 days, have stayed in or transited through the seven French regions” – so even if you are coming from a non-alert zone if you have passed through the border regions you will need to get tested.

Travellers from several other countries including the UK are also required to take a test on or before arrival in Italy.

Travellers can either get tested before their journey – both the PCR nasal swab and the finger-prick tests are accepted, so long as they're carried out no more than 72 hours before your journey – or within 48 hours of arriving.

Several of Italy's main transport hubs such as Fiumicino and Ciampino airports in Rome and Santa Maria Novella train station in Florence have set up rapid testing facilities for passengers, but if you're driving over the border you will need to make your way to the nearest testing centre once you arrive.

You can find a list of testing centres on the relevant region's website (there are links to regional websites here.) They should give opening hours and the procedure for accessing the facility, for example whether or not you need to book ahead. Border police should also be able to advise.

The Italian government at the moment only authorises certain healthcare facilities in Italy to carry out swab tests. You can’t currently get tested at your local doctor’s surgery, nor every private lab.

READ ALSO: Travelling to Italy? Here's what you need to know about coronavirus tests

Provided your test comes back negative, you won’t have to quarantine. Anyone found to be positive, including asymptomatic cases, will be contacted and given further instructions by the region's health authority (ASL). As regional health authorities oversee all testing in Italy, they will immediately be notified of any positive results.

There are some people who are exempt from this requirement, but not many.

They include cross-border workers or frontaliers, who during the lockdown were issued with passes to allow them to travel when the borders were closed.

Anyone who is transiting through Italy for 36 hours or less is also exempt, so if you are driving from France to Switzerland and pass through northern Italy you won't have to take the test (although you may have to quarantine when you reach Switzerland but that's another story – click here).