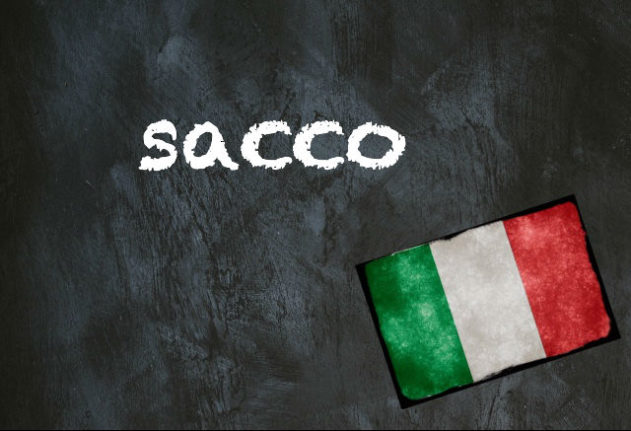 No doubt anyone who's ever run errands in Italy is already familiar with sacco: it means 'bag' or 'sack'.

You may have emptied un sacco per i rifiuti or sacco della spazzatura ('garbage bag'), received a letter from the postwoman's sacco postale ('mail bag'), picked up un sacco di farina ('bag of flour') and been asked whether you'd like un sacchetto to carry it in (the diminutive form, 'little bag', is used for plastic bags).

Napoli ci piace un sacco.
We like Naples a lot.

The idea is that there's enough of whatever you're describing to fill a whole sack – like saying 'a bagful'.

C'era un sacco di gente fuori.
There were a bunch of people out.

Pro tip: the expression is especially useful if you can't quite remember whether a noun is masculine or feminine, since you don't have to worry about using the matching article or adjective of quantity.

Take this example below: if you use molto ('many'), you need to know that the noun that follows (persone, 'people') is both feminine and plural in order to get the grammatically correct form, molte. Or you can just use un sacco di followed directly by the noun.

– Ci sono molte persone alla festa?
– Sì, ci sono un sacco di persone.
– Are there many people at the party?
– Yeah, there are heaps of people.

Just remember that un sacco (di) is pretty informal, so keep it for use in conversation.

Aside from its everyday use, sacco also features in various Italian expressions: if you spot someone doing something they shouldn't, you can prendere qualcuno con le mani nel sacco (literally 'catch someone with their hands in the bag', or as we'd say, 'catch them red-handed') – or if you're the one who needs to confess, you might vuotare il sacco ('empty the bag' or more colloquially, 'spill the beans').

Mettere qualcuno in sacco ('to put someone in the bag') is to get the better of them by outwitting them, and farina del proprio sacco ('flour from your own sack') is a way of saying 'your own work'.

Then there are the expressions that translate directly into English: un sacco di patate ('a sack of potatoes') is what it sounds like, someone ungainly or clumsy, un sacco d'ossa ('a bag of bones') is someone who's far too thin, and un sacco di merda is… well, you can figure it out.