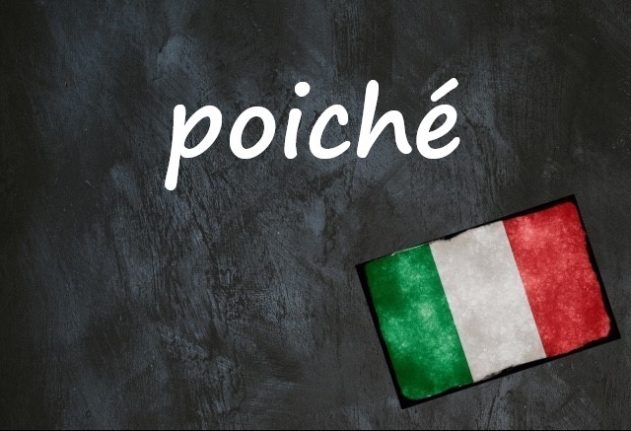 While the Italian word perché (meaning ‘why’ or ‘because’) is one you’ll learn early on, it has a more confusing cousin – or two.

A reader recently emailed with the following question:

“Is there a difference between perché and poiché? I’ve seen both translated as ‘because’.”

There is a difference – as we’ll try to explain below.

Poiché means “since” or “seeing as”.

Poiché is sometimes mistaken for a more formal synonym of perché. But while it can be used in a similar way, it’s not the same.

Perché is used when both asking and answering questions. It can be translated into English as both ‘why’ and ‘because’.

– Why aren’t you at school?

Poiché is similar to perché in its ‘because’ form – but it stresses the fact that the answer is a consequence of something. And it can’t be used in place of the ‘why’ perché when asking questions.

– I’m going to stop talking, seeing as nobody is listening to me.

As you can see, poiché goes at the beginning of a sentence or clause.

And unlike perché, you’ll rarely hear poiché used in casual conversation. It’s quite formal, and more commonly used in writing; from novels to textbooks, and in Italian language exams.

Less formal alternatives for speech include siccome (since) and dato che (given that). Even visto che (condisering that) is probably more commonly used.

Now that we’ve got the difference between those two sorted out, what about purché?

It introduces a conditional subordinate clause, and it should always be followed by the subjunctive.

– You can stay here, as long as you’re quiet.

You’ll get the hang of using all of these little Italian words in time – as long as you keep practicing.

Find our complete Word of the Day archive here. Do you have a favourite Italian word you’d like us to feature? If so, please email us with your suggestion.