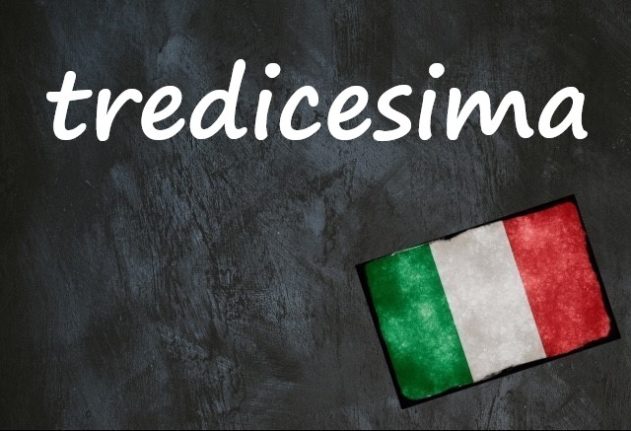 You may know that today’s word means ‘thirteenth’ in Italian. But if you’re wondering why people are talking about it around mid-December, we’re here to explain.

La tredicesima is the name of a thirteenth salary instalemnt paid in mid-December, just in time for gift shopping.

It’s often seen as a perk for state employees, but actually arrives in the December pay packets of many public or private sector employees with permanent contracts. It’s not linked to performance, and it’s not technically a bonus.

It’s just a different way of dividing a yearly salary which means employees effectively get paid double right before Christmas.

It was one of many policies introduced under Benito Mussolini’s Fascist regime to curry favour with the working population: initially brought in for factory workers before being extended to all employees at the time.

While it’s no longer a requirement for all companies to offer this, it’s still widely seen as a perk.

However, in recent years more and more companies have been declining to include a tredicesima in employment contracts, due to the difficulty of affording a double salary payment in December.

And as Italy faces a cost of living crisis, it’s going to be difficult for businesses to do so agan this year – but even more welcome for those who do receive it.

Such a big bonus may sound unusual to people from the US or UK, but Brazil, Singapore, Germany and Austria are among the countries with similar policies.

As if that’s not enough, Italy has a fourteenth salary, too. La quattordicesima is more common among generously-rewarded managers and executives, and is paid in June – just in time to fund a month or two of summer holidays.