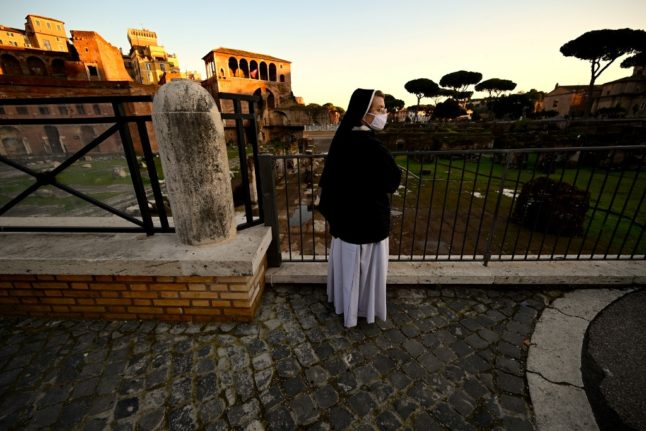 **Note: This article is no longer being updated. For the latest on Italy's coronavirus restrictions, please click here.**

A new emergency decree – formally called a DPCM (Decreto del presidente del consiglio, or 'prime minister's decree') – containing a revised set of coronvirus rules is due to be announced by Friday January 15th, when the current decree expires.

While Prime Minister Giuseppe Conte on Wednesday focused on getting approval for his plan for the Recovery Fund, Health Minister Roberto Speranza addressed parliament's lower house on the planned rule changes.

“This week intensive care occupancy is increasing by more than 30%, the Rt index has risen and there are more outbreaks with an unknown origin,” Speranza told parliament on Wednesday.

“We know that Covid has numbered months left, and with vaccines we will defeat this virus. But we have not yet won and we must not misread this decisive phase,” Speranza said.

The latest official health data shows that the contagion risk is currently high in 12 of italy's 20 regions, Speranza said.

The new decree is set to come into force from January 16th, though is not yet known how long it will be in place for.

A draft text of the new decree still needs to be debated in parliament, and likely amended, before being signed into law.

Here's what we know at the moment based on Speranza's comments on Wednesday.

Speranza said the government is looking at keeping a ban on non-essential travel between all regions in place at all times.

He has also previously suggested that the whole country will be placed under orange zone restrictions on weekends throughout January.

In the lower-risk yellow zones, “in the new dpcm it is the government's intention to reopen the museums”, Speranza said on Wednesday.
Limit on visitors at home
The government's current recommended two-guest limit at home is expected to stay in place under the new decree.
“It is the intention of the government to confirm in the new decree the indication to be able to receive a maximum of two non-cohabiting people, as already happened during the Christmas holidays,” Speranza said.
Children under 14 are currently exempt from the limit, and this is set to remain a recommendation, not a law.
More restrictions on restaurants
The government also plans to introduce a ban on the sale of take-away food and drinks after 6pm, Speranza confirmed.
Under existing rules, bars and restaurants even in the lower-risk ‘yellow’ zones must close at 6pm. Takeaway is then allowed until 10pm, though current rules state that customers must not eat at the premises.
MAP: Which zone is your region in under Italy's coronavirus tier system?

In addition to the red, orange and yellow zones under Italy's tiered system, “the government also intends to provide a fourth zone, white – only for those regions with incidence of fewer than 50 cases per 100 thousand inhabitants and an Rt number under 1”, Speranza said. while stressing that inhabitants would need to continue “respecting all social distancing measures”.

Toti said white zones would allow “a slow return to normality to begin.”

The 12 'high-risk' regions are expected to be declared 'orange' zones by Friday.

And even in the areas that will remain yellow, movement between regions will be prohibited except for essential reasons, Speranza said.

Extension of the state of emergency

The government is set to extend the Covid-19 state of emergency until at least the end of April, Speranza said on Wednesday.

“When all the (virus) parameters deteriorate at the same time, we are obliged to take new measures and the government considers extending the state of emergency until April 30th to be inevitable,” Speranza told the Lower House.

The state of emergency does not determine the rules.

However, it allows the govenment to bypass red tape, speeding up the response to the changing coronavirus situation by passing new rules under emergency decrees.