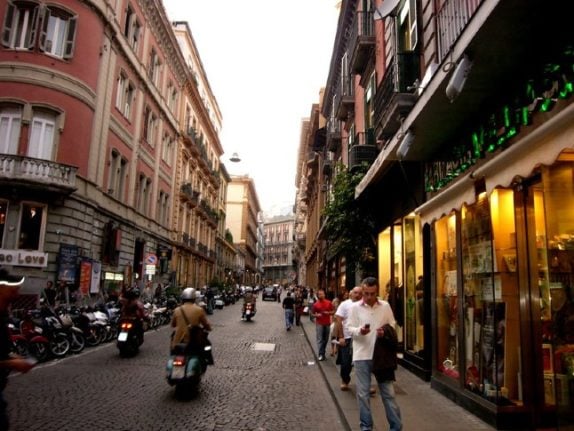 Campania, the region including Naples, is one of the few in Italy where top-level “red zone” restrictions, meaning the closure of most shops, were on Friday extended for at least another week.

In the central Chiaia shopping district, shopkeepers formed a human chain, clutching women’s undergarments, and carrying placards such as “We can no longer pay rent and bills” and “The state has forgotten about us”.

Lingerie has become a symbol of retailers’ protests in Naples because, since underwear is considered an essential item, shops that offer them can stay open through the lockdown.

Many started to sell women’s underwear “because they have families to feed, rents to pay and staff to support”, Carla della Corte, head of the local
chapter of the Confcommercio retailers’ lobby, told the Corriere della Sera daily.

“[Selling] underwear is a way to survive,” she added. According to local newspaper Il Mattino, about 150 shopkeepers took part in the Saturday protest. Earlier this week, other retailers gathered in a square holding large wooden crosses, symbolising their suffering. Italy, the first country in Europe to face the full force of the pandemic and the first to go into national lockdown last year, has been hit especially hard by the crisis.

The country has reported more than 113,500 coronavirus deaths, while the economy tanked by almost nine percent last year, and some 945,000 jobs have been lost since February 2020.

But despite mounting anti-lockdown protests, with clashes this week in Rome between bar and restaurant owners and police, the government is not expected to allow wider reopenings before May.

Restrictions might be eased once more headway is made with vaccinations, Prime Minister Mario Draghi has suggested. So far, 12.6 million doses have been administered in a country of some 60 million inhabitants.