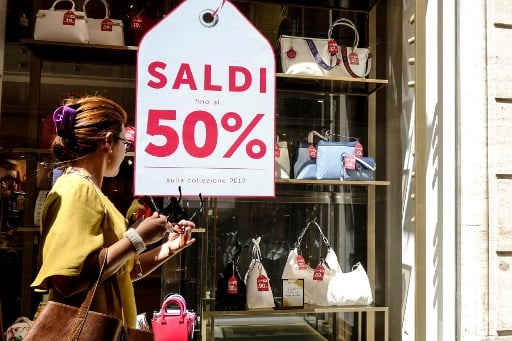 Italian shops can only hold sales twice a year – once in winter, once in summer – and they are subject to various government regulations.

Trade associations have said these rules should be removed, at least for 2021, as spending and footfall is expected to remain lower than usual due to the pandemic and subsequent economic downturn.

Shops also say they are struggling to compete with the year-round discounts offered by online retailers.

READ ALSO: Everything you need to know about sales shopping in Italy

Another particular feature of Italy’s sales is that they begin and end on different dates in each region.

This summer, several local authorities have said they will postpone and/or shorten the sales period after prolonged shop closures earlier this year.

When do the sales start?

Here’s when the 2021 summer sales officially begin in each Italian region:

You might notice that some bigger stores have started limited sales earlier than these dates, with discounts available only to those shoppers who have a membership card.

Why are the sales postponed or shortened in some areas?

The January sales this year were postponed for up to a month in many areas amid tight health restrictions and concerns about crowding.

For summer however, all of the country is under low-level ‘white’ or ‘yellow’ zone restrictions, and the country’s health situation has been continually improving for weeks.

Instead, the delay this time is intended to allow shop owners more time to recover profits after spending weeks in the ‘red zone’ in early 2021, which meant the closure of most shops and other businesses.

In the Puglia region – among the areas which spent the longest time under ‘red zone’ rules earlier this year – the local government stated on Thursday that the almost one-month delay to the sales period “is intended to support the resumption of trade, and to support commercial activities severely tested by the persistence of the pandemic and the consequent restrictions.”

It said the prolonged red zone restrictions earlier this year had “significantly compromised the performance” of the local economy.