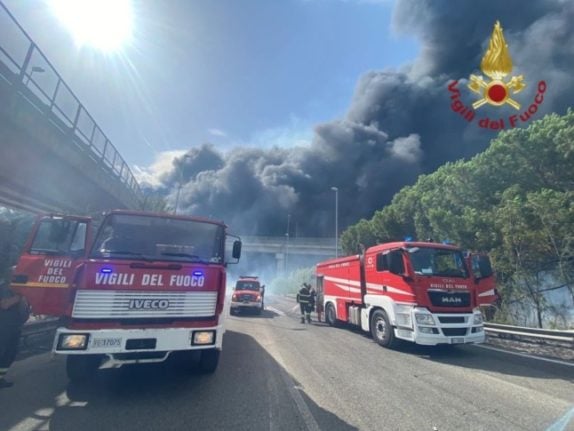 “In the last 24 hours, firefighters have carried out more than 800 interventions: 250 in Sicily, 130 in Puglia and Calabria, 90 in Lazio and 70 in Campania,” the brigade tweeted.

It said firefighters were still working against blazes in the Sicilian cities of Catania, Palermo and Syracuse.

Italy’s entire fleet of 15 Canadair water-carrying planes was working to put out the blazes on Sunday, the fire brigade tweeted.

On Friday, 150 people were trapped by fires in two seaside areas of the port city of Catania before being evacuated by sea by the coast guard, according to Italian newspaper Corriere Della Sera.

The area’s airport also closed temporarily to give priority to air rescue and firefighting missions.

This came after more than 20,000 hectares of forest, olive groves and crops were destroyed by a blaze in Sardinia last weekend.

On Sunday many areas baked in temperatures above 40 degrees, with the Italian health ministry issuing red alerts for the cities of Palermo, Bari, Catania, Campobasso, Frosinone, Pescara, Trieste and Perugia.

While the south of Italy has been burning, the north has suffered wild storms.

“The cost of the damage caused throughout the northern Italian countryside by the violent storms and hail during this crazy summer amounts to tens of millions of euros,” the Coldiretti agricultural organisation said.

In Spain, meanwhile, dozens of firefighters backed by water-dropping aircraft were battling a wildfire that broke out Saturday afternoon near the San Juan reservoir, about 70 kilometres (40 miles) east of Madrid.

Firefighters said Sunday they had managed to stabilise the blaze overnight but local authorities urged people to stay away from the reservoir, a popular bathing spot for residents of the Spanish capital.

Fires have also been raging across other parts of southern Europe, including Greece and tourist hotspots in southern Turkey, where wildfires have claimed eight lives.

Fanned by soaring temperatures, strong winds and climate change — which experts say increases both the frequency and intensity of such blazes — this year’s fire season has been significantly more destructive than the previous average, EU data shows.