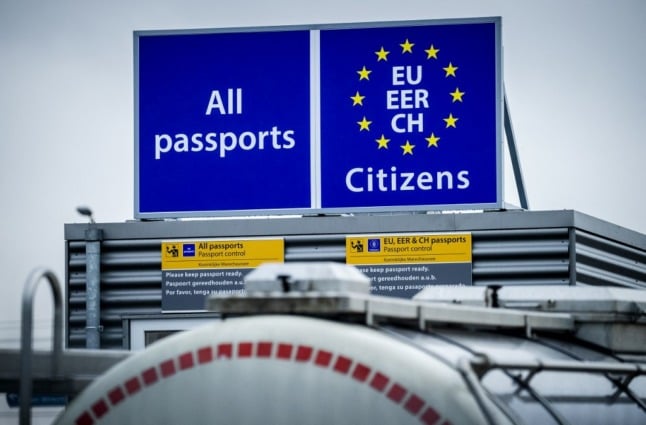 Since the end of the Brexit transition period, Brits crossing EU borders have been divided into two groups; those with the right of residency or long-stay visas and visitors.

For visitors, the 90-day rule comes into play, meaning that they can no longer spend more than 90 days out of every 180 in the Schengen zone.

And border guards can keep track of how long people have spent inside the Bloc by means of scanning passports and stamping them establishes a record of exactly when the person entered the Schengen zone and when they left.

But for Brits who have the right of residency in an EU country – either through a visa or a residency card – things are different.

If you are a resident in, for example, France any time that you spend there does not count to your 90 day limit (although if you were to enter Spain, Sweden or Italy the 90-day clock would begin ticking).

British residents should therefore not have their passport stamped when they are entering the EU country they live in.

What should you do?

When approaching passport control going either in or out of the country where you live, you should present both your passport and proof of residency – whether this is your visa, residency card or (in some countries) proof that you have applied for residency.

Don’t wait to be asked for this, because at busy borders officers will just presume that anyone presenting only a passport is a tourist.

You might think you only need to present proof of residency when entering the country, but in fact you should show it when leaving as well, as passports are regularly stamped on both exit and entry.

If you are travelling within the Schengen zone it is a lot less likely that documents will be required when crossing the border, but if asked, you should present both your passport and residency document.

What if the official wants to stamp your passport?

Since the end of the Brexit transition period, The Local has received multiple reports of the passports of residents being stamped in error, even after they have pointed out to border staff that this is not necessary.

“I just returned to my residence in Italy today from the UK.  Unfortunately my passport was stamped. I gave my Italian ID card to them but it didn’t make any difference,” one reader told us in an email that echoed the stories of many.

Another said: “My British passport was stamped on returning to Berlin despite me being a resident and asking the border police (in German) not to do so and why.”

The problem of wrongly stamped passports seems to have been most common in January and February 2020, immediately after the transition period, so could have been put down to people getting to grips with the new system.

However, this does seem to be still happening in some cases, although the unusually low levels of travel during the pandemic make getting an accurate picture difficult.

Lyn Thompson, who lives in Charente-Maritime in France, said: “I have travelled three times between France (where I live) and the UK since April 2021, due to family illness.

“The biggest issue each time has been persuading French Border Force officials NOT to stamp my passport, despite the fact I have a Titre de Sejour (residency permit) which I have shown alongside my passport.

“I was unable to prevent this the first time I returned (via Eurostar) despite arguing with the official, so my passport has a stamp which effectively says I have only 90 days from April to stay in Europe. The most recent time I travelled (by air) I had yet another argument with French Border Force who told me that the rules were that every British passport should be stamped.

“I pointed out that the stamp allowed me to stay for only 90 days whereas my Titre de Sejour meant that I was resident in France and therefore didn’t need to/shouldn’t have my passport stamped, and our discussion went on for some time.

“He only eventually let me through without a stamp because a massive queue was building up and he obviously wanted to get rid of this difficult woman. While the Titre de sejour should trump the passport stamp (at least I hope so) I really don’t want to find myself arguing about my right to return to France when the first 90 days is up – after all, if the Border Force are ignoring the Titre de Sejour and stamping anyway, they are just as likely to ignore it again and refuse entry.

“So this is adding further worry and hassle to what is already a stressful journey, given the circumstances.”

France resident Gillian Price added: “The French border control insisted they stamped our passports even though we showed them our new carte de séjour residency cards, EDF bill and bank statements with our French address.

“We now have a 90 day visa stamp. The border control insisted every UK passport holder need to be stamped even though we are resident in France!”

We fully appreciate that having an argument with a border guard in another language can be a daunting task – especially as you feel the waves of frustration from everyone behind you in the queue – but if you see an error being made it is important that you point this out.

What happens if your passport is stamped in error?

This is of course the key point, but it is also where things get hazy.

The Local has so far not received any reports of travellers who have run into later problems after an incorrect stamp – although we are keen to hear of any. That said, it’s only nine months since the transition period ended and many people have not been travelling because of the pandemic and travel restrictions, so it may be that problems are yet to reveal themselves.

The British Embassy in Germany told us: “UK nationals who were legally resident in Germany prior to the end of the transition period on December 31st 2020, and are therefore subject to the Withdrawal Agreement should not have their passports stamped when re-entering Germany.

“However, a stamp in your passport does not alter your rights under the Withdrawal Agreement, such as your right to reside here and to receive a new residence document.”

The Embassy spokesman added: “We have raised this issue with the German authorities and they have provided the following advice for those UK nationals affected:

“Stamping a passport at the border does not mean that a decision on residence status has been taken. The stamp merely documents that the passport holder was checked in the place stated on the stamp, whether this check had been performed in the course of an entry or exit, and which means of transport was used.

“The stamp entails neither the loss of rights under the Withdrawal Agreement nor in any other way a change of legal status. Consequently, a stamp on entry does not need to be annulled and may be retained unaltered in the passport as a souvenir.

“If however someone exits the Schengen area more than 90 days after their passport was stamped, then they should also carry with them a document demonstrating their current residence status, for example as a beneficiary of the Withdrawal Agreement.”

The British Embassies in France and Spain have provided similar advice – namely that the stamp does not alter your rights of residency and incorrect stamps do not need to be annulled.

However, while a stamp may not alter your rights of residency, does having one in your passport mean you may run into problems at the border? Your residency status should be easy to prove, but it might involve delays, extra checks or even interrogations while travelling.

The advice from all official bodies is to carry with you at all times the documentation that proves your right of residency in the EU.

If you have experienced any problems with passport stamping, please let us know at [email protected]