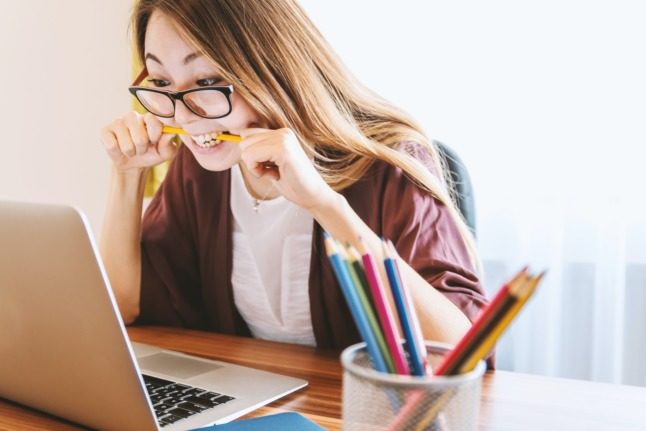 Tremendo is a particularly cruel false friend because it sounds exactly like tremendous, and in fact the two words have the same Latin root: tremendus, meaning something to be dreaded and trembled at.

But while a couple of hundred years ago the English version branched off and took on the positive meaning of ‘extraordinarily great’, the Italian word retained its Latin sense and continues to mean frightful or awful.

This obviously has the potential to generate a massive faux pas and alienate everyone around you; particularly if, just when you were getting compliments on how much your Italian has improved, you enthuse that your mutual friend’s live acoustic guitar performance is proprio tremendo (really terrible) only to see everyone’s faces fall faster than a deflated soufflé.

Many foreign residents in Italy won’t have come across this word until early 2020, when all of a sudden tamponi were all over the news. It means a swab – these days, it’s almost exclusively used to mean Covid test swabs – but those reliant on Google translate may have been confused as to why the government was suddenly mass-administering tampons.

READ ALSO: The Italian words and phrases we’ve learned during the coronavirus crisis

This isn’t a translation fail in and of itself because a tampone is also a tampon – it’s just that in 95% of the news articles you come across these days, that’s not the meaning the outlet’s going for.

Another similar false friend – the bane of anglophone students of Latin languages everywhere, from French to Spanish to Italian to Portuguese – is preservativo. This one is  unequivocal: it always means condoms, never preservatives or preserves.

If you call up your close friend or significant other and are greeted by the sound of a roomful of people and the words “è un casino qua”, there’s no need to worry that they’ve developed a gambling habit.

A casino means a noise, a racket, chaos, a mess. It could be used to describe a traffic snarl up, a crowd entering a football stadium, or a noisy subway car.

It can also describe a mess up or disaster.

Finally, casino is also an old-fashioned word for a brothel.

So it means a lot of things, just not… casino.

What’s a casino in Italian, you ask? It’s just one small accent away in casinò, with the emphasis on the final syllable.

Speaking of loud noises, if you’ve ever lived in an Italian city you’ve probably lived in a large apartment block, where you have to get used to being surrounded by noise – from the family with a newborn to the teenager practicing their musical instrument at all hours to the seemingly unending construction work.

If a friend complains to you about the rumore interrupting their weekend lie in, then, they’re not talking about being disturbed by a ‘rumour’ (although your neighbours having a good old 100-decibel gossip in the courtyard can definitely do the job), but by a racket or din.

What in English we call a rumour or piece of gossip is a pettegolezzo. You could also say gira voce che – literally, ‘a voice is circulating that…’:

You wouldn’t refer to someone who remembered to hold the door open for you as ‘educated’ in English, but in Italian they could indeed be described as educato/a – polite, well-mannered.

Maleducato, its antonym, therefore, doesn’t mean poorly educated but rude, and along with incivile (uncivilised) is a good non-vulgar insult to use on someone you feel has behaved extremely discourteously towards you.

If you do want to say that someone is educated, you could describe them as istruito/a – literally, instructed – or colto/a – it’s etymologically close to ‘cultivated’ in English, but sounds a lot less old fashioned in Italian.

If your car gets rear-ended in Italy you haven’t had an accidente but an incidente – a word which can also be used to describe more minor mishaps, like knocking over a vase.

An accidente, by contrast, is a misfortune or a sudden illness or stroke/seizure. You’ll sometimes hear accidenti! used as a twee U-rated exclamation, meaning something along the lines of darn it! Or holy smokes!

If you want to say you did something ‘by accident’ you would say “non l’ho fatto di proposito” – literally, I didn’t do it on purpose.

There’s been a push from some quarters in recent years to switch out the English use of ‘accident’ for a traffic collision for the more neutral ‘incident’ to reflect the fact that it’s not necessarily an innocent mistake with no guilty parties. So in a few years it’s possible this one may no longer be a false friend.

If you’re sensibile in Italian you’re not level-headed, but sensitive or emotional. As in English, it’s not a bad thing to be sensibile, though someone who’s oversensitive could be described as permaloso/a: touchy, thin-skinned, prickly, or crabby.

To say that someone is sensible, you could describe them as sensato/a or ragionevole (reasonable).

These words only work for describing a person or an idea. If you wanted to start talking about sensible clothes, you’d want indumenti adatti – literally, suitable clothes.

If you want to say ‘actually’ the way you would in English to correct or preempt a misapprehension, you could say in realtà (in reality), in effetti (in effect) or per dire la verità (to tell the truth).

If you want to use actually to mean ‘for real’ you can say per davvero.

Non intendevo ferirti per davvero!
I didn’t mean to actually hurt you!

Pretendere actually has quite a few meanings in Italian – none of which, unfortunately, are to pretend.

Instead it can mean any of to claim, to demand or insist, to presume or expect, or to aspire.

Pretende di essere la legittima proprietaria.
She claims to be the rightful owner.

Cosa pretendi da noi?
What do you expect from us?

If you want to say pretend, you want either fingere or fare finta – to fake.

Davanti a me fa finta che tutto vada bene.
In front of me she pretends everything’s fine.

Finally, we have this little false friend. If someone describes you as baldo/a when you have a full head of hair, don’t be confused – it doesn’t mean bald, but bold or hardy.

Dwayne Johnson frequently plays characters who are baldo, but his lack of hair is incidental – the word could just as well be applied to someone as hirsute as Jason Momoa, provided they show some pluck.

If you want to say someone is bald in Italian, that word is calvo.

Translation fails that go the other way

That covers our top 10 Italian language fails by native anglophones, but it’s not just English speakers that mess up when attempting Italian – sometimes it works in reverse.

As a bonus, here are a few common Italian-to-English mistakes.

Both opportunità and possibilità can mean opportunity in Italian, so you’ll sometimes hear Italians say they “had the possibility” to do something when they mean they “got the opportunity” (to study abroad, to work in an industry, etc). It’s not so wrong you can’t decipher the meaning, but it sounds a little off.

An Italian friend for years regularly used ‘fastidious’ when they meant ‘annoying’ (which is what fastidioso means in Italian) and I’d correct them every time they did so, which they probably found both annoying and fastidious.

Fastidious in English of course means pernickety, focused on accuracy and detail. The fact that it’s not very widely used in English has probably saved anglophones from making the mistake in the other direction.

In Italian you don’t prendere (take) but fare (make) a photo, so it’s an easy mistake for Italians to make when translating the phrase into English. After a few years of speaking Italian you might even find yourself slipping into the habit as a native English speaker.

Then there’s those ostensibly ‘English’ words that have found their way into modern Italian but are either meaningless or mean something totally different in English.

Among them are ‘pullman’, for coach (this has its origins in the Pullman Company, which manufactured American train carriages); ‘box’, for garage; a ‘fiction’ for a TV drama; and ‘stage’, pronounced the English way, to mean internship.

It’s a bit like how a ‘panini’ in English has come to mean a specific type of flattened toasted filled mini-baguette, whereas in Italian panini is plural for any type of sandwich (and in the singular is a panino).

So there you go – whether you’re a English speaker learning Italian or vice versa, dodge these pitfalls and you’ll be well on your way to communicating without putting your foot in your mouth (fare una gaffe).

Are you working on your language skills? See more in The Local’s Italian language section.

Are you ready to put pedal to the metal and go full bore when it comes to learning this expression?

Andare a manetta (and-AH-rreh a mann-ETT-ta) in fact means just that: to go at top speed, flat out, at full pelt.

Conveniently for English speakers, it translates pretty directly from the phrase ‘to go full throttle’. Andare is of course the verb ‘to go’ and manetta is the Italian word for a throttle, an old-fashioned sort of lever used in vehicles to regulate the amount of fuel being fed into the engine.

To go full throttle was to channel the maximum amount of petrol possible into the motor so that the car could reach top speed, which is where both phrases come from.

Like in English, it can be used refer literally to, e.g., F1 drivers, but is often used in a metaphorical sense. It’s the kind of colloquial phrase that you’re more likely to hear in spoken conversation than see written down in a book, and is most widely used among young Italians.

Se vuoi arrivare entro un’ora dovrai andare a manetta.
If you want to get there in an hour you’ll have to go full tilt.

You don’t need to restrict yourself to the verb andare: there are various actions that could be done a manetta, such as parlare a manetta (talk at top speed), alzare il volume a manetta (turn the sound up to top volume – e.g. on the TV or radio), or piovere a manetta (tip it down with rain).

È la mia canzone preferita, alza la radio a manetta!
This is my favourite song, turn the radio up as loud as it’ll go!

You might wonder if there’s a connection to manette (handcuffs) but the two aren’t to be confused: the etymological link comes simply from the word hand (mano), a manetta being a hand-controlled thrust lever and manette being, well, handcuffs.

To help you differentiate, aside from context, you’ll almost always only see manette in the plural form, whereas a manetta is only used in the singular form.

Toglietemi immediatamente queste manette!
Take these handcuffs off me at once!

Parlavi a manetta ieri sera.
You were talking at a 100 miles an hour yesterday evening.