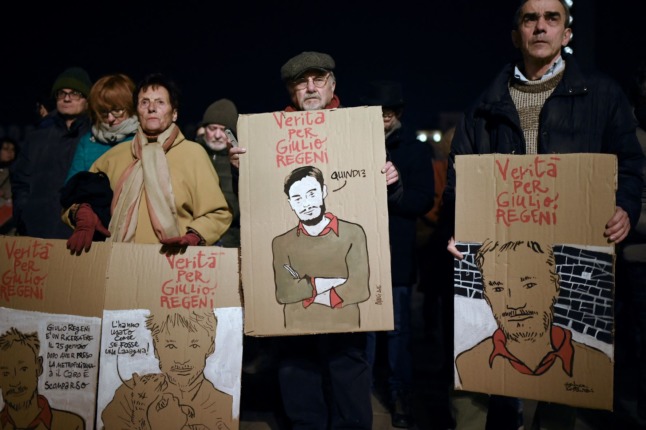 Activists take part in a demonstration in Piazza Castello in Turin on January 25, 2020, to mark the fourth anniversary since the disappearance of Italian student Giulio Regeni. Marco BERTORELLO / AFP

The trial of four Egyptian security officers in Rome for the brutal killing of Italian student Giulio Regeni five years ago was thrown out by judges Thursday, “bitterly” disappointing his family which vowed not to give up on the case.

The judges ruled that the four could not be tried in absentia because prosecutors had been unable to officially inform them of the judicial process against them, a court-appointed defence lawyer told AFP.

The officers stand accused of kidnapping, conspiracy to murder and grievous bodily harm in the case, which sparked outrage in Italy and has strained diplomatic relations with Egypt.

“We note with bitterness the court’s decision, which rewards Egyptian arrogance,” the Regeni family’s lawyer, Alessandra Ballerini, told reporters outside the court.

Regeni’s parents and sister had been present at the hearing in the bunker room of Rebibbia prison, often the stage for mafia trials.

The 28-year-old was doing research for a doctorate at Cambridge University when he was abducted in Cairo in January 2016.

His body, bearing extensive signs of torture, was eventually found dumped on the outskirts of Cairo, naked from the waist down.

The Italian government joined the proceedings with a civil suit for damages, in a symbolic show of support. The parents of Giulio Regeni hold a banner reading ”Truth for Giulio Regeni” during a press conference with Senator Luigi Manconi, president of the Human Rights commission at the Italian Senate, on March 29, 2016 in Rome. ANDREAS SOLARO / AFP

But before the trial proper could begin, the court had first to rule on whether the four suspects, members of Egypt’s National Security Agency (NSA), were aware of the proceedings against them. Egypt has repeatedly refused to provide their contact details.

At a preliminary hearing in May, a judge ruled that media coverage meant news of the trial would have reached them.

But the court overturned that ruling on Thursday, effectively sending the prosecution back to square one.

The four are named in court documents as General Tariq Sabir, Colonels Athar Kamel and Uhsam Helmi and Major Magdi Ibrahim Abdelal Sharif, who is accused of carrying out the killing.

Investigators believe Regeni was abducted and killed after being mistaken for a foreign spy.

Prosecutor Sergio Colaiocco had told the court that eye witness testimony and other “significant elements of proof” implicated the security officers in the murder.

All four not only knew about the trial but had “systematically and persistently acted to slow and block the investigation”, he said.

But lawyer Tranquillino Sarno, appointed by the court to defend Colonel Kamel, said the case should be thrown out.

“The defendants know nothing. Not what they are accused of. Not that we are here today”. Activists take part in a demonstration in Piazza Castello in Turin on January 25, 2020, to mark the fourth anniversary since the disappearance of Giulio Regeni. Marco BERTORELLO / AFP

Regeni’s corpse was found nine days after he disappeared. His mother later said it had been so badly mutilated she only recognised her son by the “tip of his nose”.

Five of his teeth had been broken, 15 of his bones had been fractured and letters had been inscribed into his flesh, lawyer Ballerini said.

As part of his work for a doctorate, Regeni had been researching Egyptian trade unions, a particularly sensitive political issue.

“The decision leaves a bitter taste, but must be respected, and shows what a fair trail looks like — something that could never take place in today’s Egypt,” Claudio Francavilla from Human Rights Watch told AFP.

He said the hearing had at least “exposed in detail the shameful and persistent lack of cooperation by Egyptian authorities, marred by diversions, lies, delays”.