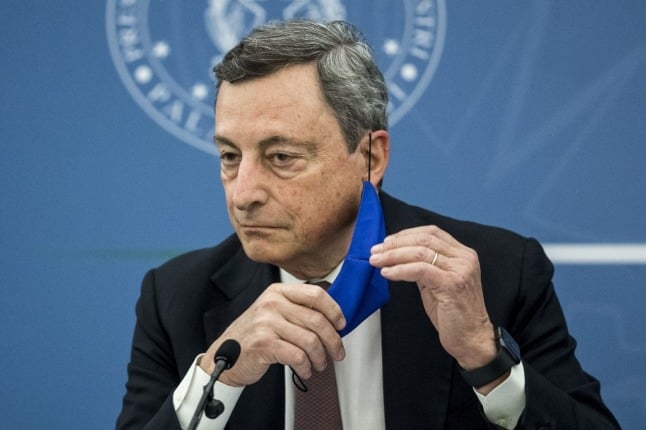 Italy’s Council of Ministers, the government cabinet, unanimously approved a decree on Wednesday afternoon meaning the country’s health certificate, the green pass, will no longer allow access to “non-essential” services including leisure and cultural venues unless the bearer is vaccinated against or recovered from Covid-19.

Those who are not vaccinated or recovered will be unable to access hotels, gyms, nightclubs, ski lifts and stadiums, as well as to be served indoors at bars and restaurants under new rules set to take effect from December 6th until at least January 15th.

“The situation is under control, we are in the best situation in Europe thanks to the vaccination campaign which was a remarkable success,” Draghi stated in a televised press conference on Monday evening.

“Our thoughts are of the dead, the fall in economic activity by 109 percent, the closed businesses, the children out of school,” he continued.

“This year Italians reacted, we have started to get back to normal and now we want to maintain this normality, we don’t want to take risks. And it is in this spirit that these measures have been taken.”

He said the new restrictions would mean a “normal” Christmas this year for those who are vaccinated, and would “give certainty to the tourist season”.

“Do you remember Christmas last year?” he said. “We want to have a different Christmas.”

The stricter-than-expected measures were announced after the EU health agency on Wednesday appealed to member states to “urgently” introduce tough measures amid surging infection rates.

The Netherlands and France are also thought likely to also adopt a stricter health pass system, similar to so-called 2G rules already in place in Germany, in the coming days.

Italian green passes issued based on a negative test result will still be valid for entry to workplaces as well as for “essential services”, news agency Ansa reports.

The new rules will mean green passes are now also required on local public transport, as well as on long-distance trains and domestic flights as is currently the case.

However, public transport will also be accessible using passes obtained based on a negative test result.

The validity period of passes based on a negative test result will not change, sources reportedly said, contrary to previous reports.

READ ALSO: From lockdowns to bans on unvaccinated – How Europe is tackling new Covid wave

Under the new ‘super green pass’ rules, businesses will be able to remain open even if a region is declared a ‘yellow’ or ‘orange’ zone under Italy’s four-tiered system of restrictions, news agency Ansa reports.

If a region is declared a high-risk ‘red’ zone however it appears that business closures and other restrictions would still apply.

At the moment all of Italy remains in the lowest-risk ‘white’ zone category, with few health measures in place.

However several regions are now nearing the thresholds at which they would be moved into the ‘yellow’ zone next week and, if the situation continues to worsen, then risk being placed under orange zone restrictions two weeks later.

The new decree will also cut the validity of green passes from 12 to nine months for those who are vaccinated, including with a third dose.

The government had looked at cutting the validity of passes based on PCR test results from 72 to 48 hours, and those from the results of rapid testing will be reduced from 48 to 24 hours. However these plans have reportedly been shelved.

The government is set to make vaccination against Covid-19 obligatory for school staff and police officers from December 15th, Health Minister Roberto Speranza stated at the press conference.

At the moment, healthcare workers including pharmacy staff and care home workers are the only group obliged to get vaccinated under a law approved in April.

“The obligation that is already in force for some categories is extended to non-health personnel who work in the rest of the health sector, to the police and the military, and to all school staff,” Speranza said.

“The extension of the obligation will also apply to the third dose “.

No green pass for under-12s

The green pass rules do not currently apply to under-12s and this will remain the case under the new decree, Ansa reported, citing government sources.

Italy is currently recommending vaccinations for all those aged over 12 years old, though an announcement on vaccines for 5-11 year olds is expected in the coming days.

If vaccinations are approved for under-12s, green pass rules and vaccine requirements will still not apply to this age group, Ansa writes.

Italy is relying heavily on vaccinations, including boosters, and the green pass system to keep the new wave of contagion under control as numbers surge across much of Europe.

Health Minister Roberto Speranza said this week that Italy would allow the administration of booster doses five months after the completion of the initial vaccination cycle.

The Italian government now aims to have 90 percent of the population over 12 years old vaccinated as soon as possible, and has indicated that boosters will be made available to the general population in early 2022.

The current figure as of Wednesday stands at 84.1 percent, according to the latest government data.