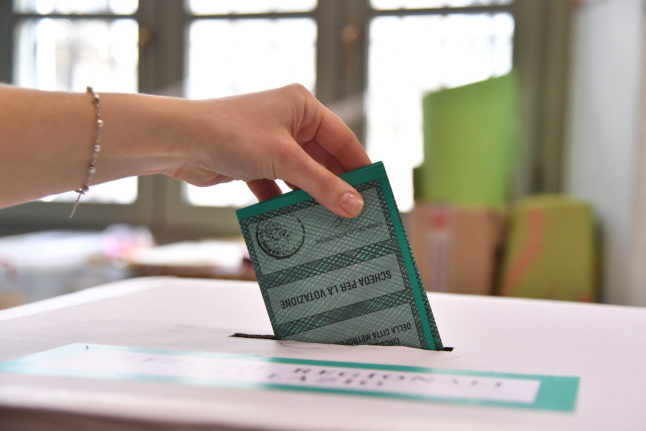 Only 20.9 percent of Italians of voting age turned out for Sunday’s referendum giustizia, or justice referendum, according to media reports – far less than the 50 percent threshold required for the results to be binding.

The numbers are the lowest seen for any referendum held in Italy since World War II, according to the financial news publication Il Sole 24 Ore, which described the event as a “historic flop”.

READ ALSO: What are Italians being asked to vote on in Sunday’s ‘justice referendum’?

Turnout was also low for the municipal elections held in 975 towns and cities across Italy on the same day, reportedly reaching just 54.72 percent – lower than the 60.12 percent seen in previous similar elections according to news agency Ansa.

Referenda are a historically popular legislative tool in Italy, but for the results to count a ‘quorum’ of 50 percent plus one of the electorate must vote.

Up until the mid-90’s, this threshold was almost always surpassed, with eight of the nine plebiscites held between 1974 and 1995 attracting a higher than 50 percent turnout (votes on the right to divorce and abortion drew particularly high numbers, with 87.7 and 79.4 percent of voters showing up respectively).

Over the last couple of decades, however, those figures have seen a direct reversal. Of the nine referendums conducted in Italy since 1997, only one has reached a quorum, making holding one a risky and expensive bet.

This latest vote had a particularly poor turnout – worse than the 2009 ‘flop of flops’ promoted by Mario Segni and Giovanni Guzzetta on proposed reforms to the electoral system, in which 23 percent of voters participated.

Representatives of the far-right League party, which led the campaign for the justice referendum, and Silvio Berlusconi’s Forza Italia party, which supported it, blamed a ‘media blackout’ for the lack of voter interest.

The vote was “boycotted with absolute silence in many newspapers and on state television,” Berlusconi said.

But according to the news daily Corriere della Sera, 82 percent of Italians were aware of the referendum. Critics say the result was predictable and the fault of promoters for including arcane questions that most laypeople would struggle to understand.

The referendum asked Italians to vote on five issues, some of them highly specialised, such as whether people should require supporting signatures to present their candidacy for election to Italy’s High Council of the Judiciary (Csm).

The questions were “very removed from people’s daily lives,” concluded a Vanity Fair editorial, “on issues that were not only linked to politics, but also extremely technical.”

When the results first came though, League party leader Matteo Salvini was reportedly initially unavailable for comment as he was out of town with his daughter.

He later acknowledged the outcome in a tweet in which he offered his “thanks to the 10 million Italians who chose to vote to change the justice system.”

“It is our duty to continue to make their voices heard!” he wrote.