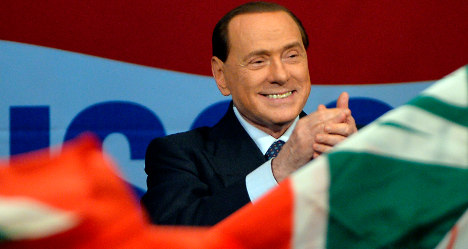 The leader of Forza Italia surprised reporters during a press conference on Thursday when he agreed with Prime Minister Matteo Renzi’s proposal to grant gay couples more legal rights.

If introduced, the gay unions legislation would be based on the German model, which allows for civil partnerships but stops short of granting gay couples marriage rights.

“The German model is the right compromise,” Berlusconi was quoted in La Stampa as saying, adding that efforts need to be made to “adapt to a different reality”.

"We came to the conclusion that the German law on civil unions represents a fair compromise between the deep respect for Christian values, which we value, and the traditional family…but those with public responsibilities cannot intervene when the demands of society change."

The same-sex unions debate is expected to reach the Senate by the end of the year, or January at the latest, Renzi said earlier this week.

Berlusconi's show of support comes a few weeks after his fiancée, Francesca Pascale, said he was a "liberal".

Until he got together with Pascale, 29, Berlusconi was better known for his anti-gay gaffes than his support of the gay community.

After a Gay Pride march in Italy in 2010, the 78-year-old said "my passion for women is better than being gay".