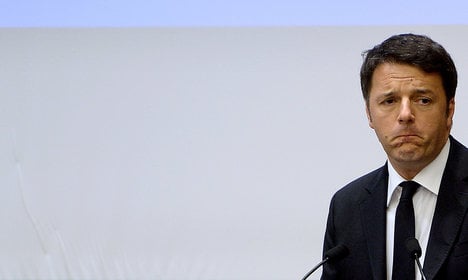 The first item on the agenda is the controversial civil unions bill, on which the Senate will vote at the end of January.

Despite Renzi pledging to get the bill passed by the end of 2015, the landmark legislation for Italy's gay community has been hampered by staunch opposition.

Angelino Alfano's New Centre Right party and the Union of the Centre have opposed the bill over its inclusion of a 'stepchild adoption' measure, which would see same-sex parents given the ability to adopt their children from previous relationships.

Alfano said he was “ready to do anything”  to stop the measure from going through.

Unsurprisingly, the Vatican has also voiced its concerns, accusing Renzi's government of “putting the traditional family in the corner”.

But while the Church has managed to derail previous attempts to get the law enacted, experts believe its influence is on the wane.

The civil unions bill is not the only new legislation Renzi promised, yet failed to deliver in 2015, after missing targets to finalize constitutional reforms and push through others affecting the country's tertiary sector.

The measures would see punishment for offenses caused by those driving drunk, or under the influence of drugs, increase to between five and 12 years, with those convicted of multiple homicide receiving a maximum sentence of 18 years. But it is not known if or when the legislation will pass this year.

Still, Renzi was upbeat after returning from a family skiing holiday in Valle d'Aosta.

“Italy is a country that maintains its promises,” he told Il Sole 24 Ore, reminding reporters that Italian GDP growth was set to rise to 1.4 percent over the next year.

“People should stop thinking of Italy as a country with its cap in its hand.”