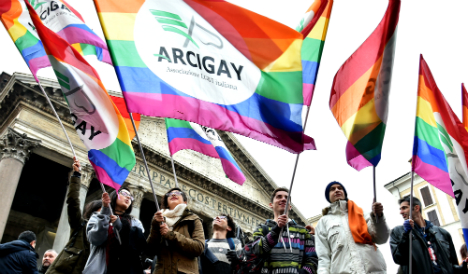 In a move that drew criticism from gay groups and many of its own supporters, the M5S refused to vote on a proposal to strike down a long list of amendments, most of them designed to strip the draft law of provisions allowing gays to be able to adopt the biological children of their partners.

As a result, the governing Democratic Party moved a resolution suspending debate on the issue until February 24th to allow for further negotiations between the parties.

But after the party decided to allow its lawmakers a free vote, it quickly became apparent that many of its Senators were much more conservative on the question than the leadership and the party group in the house insisted that all the amendments should be considered individually.

For supporters of the bill, this would mean running an unacceptable risk of the legislation being watered down.

Arcigay, Italy's leading gay rights group, voiced dismay at what it described as a U-turn by M5S.

“Not voting for this amendment means opening the highway for amendments from the (right-wing) Northern League which have the one and only objective of destroying the bill,” said spokesman Vincenzo Brana.

“I would advise the Senators of the movement to take a tour on social media to have a basic idea of the disappointment and the anger that their decision has caused in the LGBT community.”

Opinion polls suggest most voters are in favour of the principle of gay civil unions but, at best, evenly split on same-sex couples' adoption rights.

The Catholic Church has been extremely active in lobbying politicians on the question to the point of being publicly rebuked for meddling in parliament's business by Prime Minister Matteo Renzi.

If the Senate does finally adopt the bill, it will then have to go to the Chamber of Deputies for consideration. Support for it among Deputies is thought to be more solid than in the Senate.